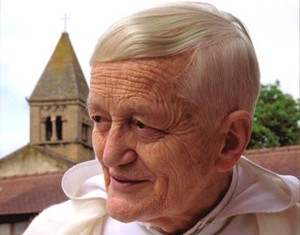 Brother Roger of Taizé was “a tireless witness of the gospel of peace and reconciliation”, Pope Francis has said.

His words were drawn from those of Pope Benedict XVI who in 2012 described Brother Roger thus.

“Passionately seeking the unity of the Church, Brother Roger opened the treasures deposited in the various Christian traditions,” and, “by the perseverance he demonstrated during his long life, he helped to change relations among still-separated Christians, tracing for many a path of reconciliation,” the Pope said.

He concluded his message with an expression of gratitude to God for the life and work of Brother Roger.

The Pontiff prayed that the Taizé Community might always maintain the very powerful testimony Brother Roger gave to the risen Christ and the call he constantly renewed to “choose to love.”

Brother Roger was stabbed to death during the evening prayer service in Taizé on 16 August 2005 by a young Romanian woman named Luminița Ruxandra Solcan who was later deemed mentally ill.

His funeral took place on 23 August 2005 and was attended by Horst Köhler, the President of Germany, and Nicolas Sarkozy, at that time Minister of the Interior of France.

The Protestant monk’s funeral was presided over by Cardinal Walter Kasper, the president of the Vatican’s Pontifical Council for Promoting Christian Unity, who celebrated the Mass with four priest-brothers of Taizé concelebrating.

Brother Roger’s successor, Brother Alois Löser, prayed for forgiveness, “With Christ on the cross we say to you, Father, forgive her, she does not know what she did.”

Brother François of Taizé has written an article titled ‘Why Brother Roger died’.

In it he recalls that among the many messages the community received in August 2005, people compared Brother Roger’s death to that of Martin Luther King, Archbishop Romero or Gandhi.

“And yet it cannot be denied that there was also a difference. Those men were engaged in a political and ideological struggle, and were assassinated by opponents who could not stand their viewpoint and their influence,” Brother François writes.

He continues, “Some would say that it is useless to seek an explanation for Brother Roger’s murder. Evil always resists explanation. A righteous man in the Old Testament said that he was hated “for no reason.” And St John put those same words on the lips of Jesus: “They hated me without reason.”

Recalling living in community with Brother Roger, his confrere highlighted an aspect of his personality that always struck him and he wondered whether it might have been the reason why he was targeted.

“Brother Roger was an innocent. It was not that he had no flaws. But an innocent is someone for whom things are self-evident in a way in which they are not for others. For innocent people, the truth is obvious. It does not depend on reasoning. They “see” it, in a certain sense, and it is hard for them to realize that other people have a more painstaking approach. What they say is simple and clear for them, and they are surprised that others do not react to it in the same way. It is easy to understand why such people often feel at a loss, or vulnerable. And yet, in general their innocence is not naïve. For them, reality is simply not as opaque as it is for others. They “see through it.”

Brother François of Taizé states that Brother Roger fascinated people by his innocence, his instant comprehension, his look.

“And I think he saw, in some people’s eyes, that fascination could be transformed into mistrust or aggression. For someone who carries irresolvable conflicts within themselves, that innocence must have become intolerable. And in that case it was not enough to insult that innocence. It had to be eliminated.”

“Doctor Bernard de Senarclens wrote, “If the light is too bright, and I think that what emanated from Brother Roger could be dazzling, that is not always easy to bear. Then, the only solution is to extinguish the source of light by eliminating it.”

“I wanted to write down these reflections because they help to bring out an aspect of the unity of Brother Roger’s life. His death set a mysterious seal on what he always was. He was not killed for a cause that he was defending. He was killed because of what he was.”

Roger Schütz was born on 12 May 1915, the ninth and youngest child of Karl Ulrich Schütz, a Protestant pastor from Bachs in the Zürcher Unterland in Switzerland, and his wife, Amélie Henriette Marsauche, a Huguenot from Burgundy, France.

The Swiss Christian leader founded the Taizé Community, an ecumenical monastic community in Burgundy, France in 1940.

Falling ill with tuberculosis, during his convalescence he began to feel drawn to a monastic way of life.

In 1940, at the start of World War II, he felt called to serve those suffering from the conflict, as his maternal grandmother had done during World War I.

He rode a bicycle from Geneva to Taizé, a small town near Mâcon, about 390 kms southeast of Paris.

The town was then located within unoccupied France, just beyond the line of demarcation from the zone occupied by German troops.

He bought an empty house, where for two years he and his sister, Genevieve, hid refugees, both Christian and Jewish, before being forced to leave Taizé, after being tipped off that the Gestapo had become aware of their activities.

In 1944, he returned to Taizé to found the Community, initially a small quasi-monastic community of men living together in poverty and obedience, open to all Christians.

Since the late 1950s, many thousands of young adults from many countries have found their way to Taizé to take part in weekly meetings of prayer and reflection. In addition, Taizé brothers make visits and lead meetings, large and small, in Africa, North and South America, Asia, and in Europe, as part of a “pilgrimage of trust on earth”.

All his life, Brother Roger devoted himself to reconciling the different Christian churches.

From a Protestant background, Brother Roger undertook a step that was without precedent since the Reformation: entering progressively into a full communion with the faith of the Catholic Church without a “conversion” that would imply a break with his origins.

In 1980, during a European Meeting in Rome, he said in Saint Peter’s Basilica in the presence of Pope John Paul II: “I have found my own identity as a Christian by reconciling within myself the faith of my origins with the mystery of the Catholic faith, without breaking fellowship with anyone.”

According to Cardinal Walter Kasper, this was accomplished as though there was a tacit understanding between Brother Roger and the Catholic Church “crossing certain confessional” and canonical barriers through what Brother Roger called a gradual enrichment of his faith with the foundations of the Catholic Church including “the ministry of unity exercised by the bishop of Rome.”