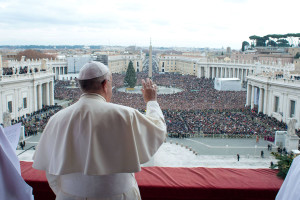 Pope Francis said on Sunday that “his thoughts are with those on-board the missing Air Asia plane that disappeared during a flight between Indonesia and Singapore”.

Speaking at the conclusion of his Angelus address, the Pope prayed for those on AirAsia Flight QZ 8501.

The jet was carrying 162 people when it lost contact with Indonesian air traffic control early Sunday.

Before communication was lost, one of the pilots reportedly asked to fly at a higher altitude because of bad weather.

It is the second plane to go missing in Southeast Asia in less than a year. The search for the missing plane is due to resume early today.

The aircraft, flying from the Indonesian city of Surabaya to Singapore, went missing as it flew at 38,000 feet over the Java Sea between the islands of Belitung and Borneo.

“I am close with my affection and prayer,” the Pope said, to the families and loved ones who are undergoing “these difficult situations with apprehension and suffering” and also to those involved in the rescue operations.

On the feast of the Holy Family, the Pope also stressed the important role played by grandparents in the family setting.

Pope Francis said the Infant Jesus with his mother Mary and St Joseph are a shining example of mercy and salvation for the entire world.

“This light which comes from the Holy Family encourages us to offer human warmth in those family situation in which, for various reasons, there is a lack of peace and harmony and forgiveness. Our concrete solidarity is just as present, especially when it comes to families who are undergoing difficult situations because of illness, lack of work, discrimination and the need to emigrate,” he said.

Then the Pope departed from his prepared text, urging all present to pray in silence with him for families facing these difficulties and who lack understanding and unity.

Jesus, he continued, “is the person who brings the (young and old) generations closer together.”

He is “the source of that love which unites family and people, overcoming every mistrust, isolation and distance.”

On the role of grandparents, Pope Francis stressed “how important” their presence is within the family and society as a whole.

“A good relationship between young and old people is a key element in the functioning of the civil and ecclesial community.” he said.

And when we look at the elderly couple in the Bible, Simeon and Anna, let’s “give a round of applause to all the grandparents in the world.”

The Pope explained how the message that comes from the Holy Family is a message of faith.

“The family of Nazareth,” he said, “is holy because it is centred on Jesus” and when a family has faith it gives them the strength to face up to difficult situations, just as it did for Mary and Joseph.