Pope Francis prays for President Trump and the USA 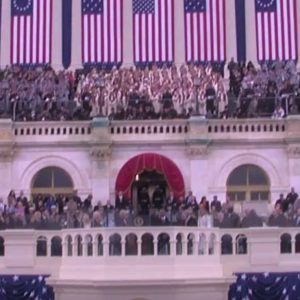 Within minutes of being sworn in as the 45th President of the United States, Donald Trump was sent a congratulatory message from Pope Francis.

In the 159-word note, the Pope offered his cordial good wishes and “the assurance of my prayers that Almighty God will grant you wisdom and strength in the exercise of your high office”.

In his inauguration speech, President Trump notably said “From this day forward, it’s going to be only America First,” leading many to fear that America will become more isolationist and less likely to engage in activities aimed at protecting democracy and human rights abroad.

Pope Francis said in his message to Mr Trump: “At a time when our human family is beset by grave humanitarian crises demanding farsighted and united political responses, I pray that your decisions will be guided by the rich spiritual and ethical values that have shaped the history of the American people and your nation’s commitment to the advancement of human dignity and freedom worldwide.”

The newly elected president also acknowledged that many Americans live in poverty and he pledged that “the forgotten men and women of our country will be forgotten no longer,” adding “we will make America wealthy again.”

In his message, Pope Francis tod Mr Trump: “Under your leadership, may America’s stature continue to be measured above all by its concern for the poor, the outcast and those in need who, like Lazarus, stand before our door. With these sentiments, I ask the Lord to grant you and your family, and all the beloved American people, his blessings of peace, concord and every material and spiritual prosperity.”