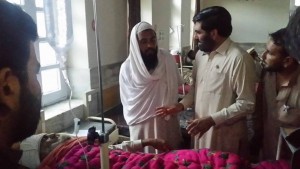 Pope Francis has expressed his sorrow at “the tragic loss of life in Afghanistan and Pakistan as a result of the earthquake in the region on Monday.”

The Pope’s remarks were conveyed in a telegram from the Vatican Secretary of State, Cardinal Pietro Parolin, and sent to Archbishop Ghaleb Moussa Abdalla Bader, the Apostolic Nuncio to Pakistan.

In his message, the Pontiff said he was praying for divine blessings of consolation and strength for those who mourn the loss of loved ones and upon the civil authorities and emergency personnel involved in the relief efforts.

He offered assurances of his prayers for the dead, as well as for the injured and those still missing.

The organisation has also launched an emergency appeal to support is aid efforts in the region.

It is supporting the distribution of shelter, food and other vital supplies to people affected by the 7.5 magnitude earthquake which struck Afghanistan and Pakistan on Monday.

The agency’s emergency efforts will be focused in Pakistan, in the northern part of the country, where over 228 people are reported to have been killed and thousands more have been injured.

The numbers of dead and wounded are expected to rise given that the situation in some remote areas of the country is not yet clear.

Trócaire is working with partner organisations close to the border of Afghanistan.

John O’Brien, Trócaire’s country director in Pakistan said, “Many thousands of people impacted by the earthquake slept outdoors last night. They were afraid to sleep indoors due to risk of aftershocks. Homes, roads and water systems have been destroyed.”

“Our immediate support will be around providing temporary shelter and distributing warm blankets and sleeping mats. We will work with local partners on the ground to save lives and help people recover from this horrific event.”

Noreen Gumbo, head of Trócaire’s Humanitarian Programme added, “Trócaire and our partners on the ground are now busy assessing the most immediate needs of the affected communities. We know that elderly people are among the most vulnerable and worst impacted and we are working to ensure they receive assistance as soon as possible.”