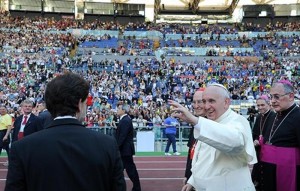 Pope Francis at 37th Convocation of Renewal of the Spirit.

(Vatican Radio) Evangelization, spiritual ecumenism, care of the poor and those in need, welcome for the marginalized: these are all founded upon the renewal of adoration of God.

This was one of the central points made by Pope Francis on Sunday during his address to the 37th National Convocation of the “Renewal of the Spirit” which was held at Rome’s Olympic Stadium.

More than 50,000 people had gathered for the event which, in addition to an encounter with the Holy Father, included praise and worship music, testimonies, and a flash mob.

During his main discourse, Pope Francis said members of the charismatic renewal had “received a great gift from the Lord.”

He said that when he thinks of members of the charismatic movement, a particular image of the Church comes to mind. “I think also of a great orchestra, where every instrument is different from the other, and the voices are also different; but all are necessary for the harmony of the music.” The Pope then reminded them that, like in an orchestra, no one in the Renewal can think of themselves as being more important than another, or consider think of themselves as a leader. “You have only one leader, only one lord: the Lord Jesus.”

As disseminators of God’s grace, the Pope called on those present to allow themselves to be guided by the Holy Spirit, and to go out onto the streets to announce the Gospel.

Pope Francis also emphasized that adoration of God is fundamental. “Adore God. Seek sanctity in the New Life of the Spirit.”

The Holy Father concluded his discourse by inviting the charismatics of the world to celebrate their 2017 Jubilee at the Vatican.

Earlier during the afternoon festivities, Pope Francis heard four testimonies, each one representing a different state in life: the priesthood, the youth, the sick and disabled, and the family.

Speaking to priests, the Pope gave them one word: Nearness. He charged priests to be near to God through Adoration, and near to the people.

To the young people: the Pope said not to keep youth locked in a safe, for otherwise it would become like a rag and serve no purpose. Youth, he said, is for giving oneself so that others might know the Lord.

Pope Francis then addressed the representatives of the family, warning that the devil seeks to destroy the family. He called on the Lord to bless families, giving them strength against these attacks from the devil.