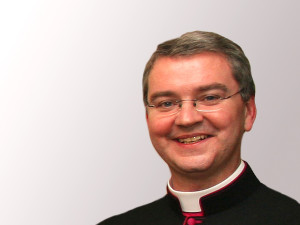 Pope Francis has appointed Monsignor Mark O’Toole, the Rector of Allen Hall Seminary in London, as the new Bishop of Plymouth.

The Bishop-elect is the youngest son of Marcus and Maura O’Toole who emigrated to London from the Connemara Gaeltacht in the 1950s.

He previously worked as a private secretary to Cardinal Murphy-O’Connor when he was Archbishop of Westminster.

Mgr O’Toole’s episcopal ordination will take place 28 January 2014 at the Cathedral Church of St Mary and St Boniface in Plymouth.

He succeeds Bishop Christopher Budd, who was Bishop of Plymouth since 1986 before retiring about 18 months ago.

The diocese covers Cornwall, Devon and Dorset and has more than 90 parishes stretching from Penzance and the Isles of Scilly in the west to parts of Bournemouth in Dorset.

“I am deeply humbled that the Holy Father, Pope Francis, has appointed me the new Bishop of Plymouth,” the Bishop-elect said on Saturday.

He said he embraced “with my whole self this deeper call to service” in the Church.

“I know that the example and witness of Pope Francis will continue to inspire and shape my ministry as Shepherd to all in the Diocese, especially to serve the poor, the weak, and those who feel alienated from God, as I work alongside fellow-Christians,” Mgr O’Toole said in a statement.

The 50-year-old cleric added, “This part of the country is known for its outstanding natural beauty, and this is mirrored in the gracious welcome shown to the newcomer by its people. I look forward very much to putting down firm roots in the Diocese and making my home in Plymouth.”

He also paid tribute to the “outstanding leadership” of the three Archbishops of Westminster he served under – Cardinal Basil Hume OSB, Cardinal Cormac Murphy-O’Connor and Archbishop Vincent Nichols.

“Each of them has taught me so much. I am deeply grateful for the friendship and love of so many in the Diocese and I ask their continued prayer. I will miss especially everyone at Allen Hall. I have seen how essential the vocation of the priest is for our Church and our society. I hope I can continue to make its promotion a priority in this new mission,” he said.

“I entrust the whole Diocese of Plymouth, and myself, into the loving care of Mary, our Mother, as we set out on this journey together, seeking also the intercession of St Boniface and our diocesan saints, especially St Cuthbert Mayne,” the Bishop-elect said.