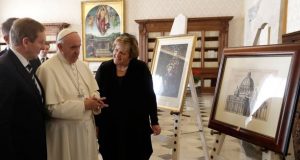 The Taoiseach, Enda Kenny, on Monday announced that Pope Francis had confirmed during their meeting that he will travel to Ireland in August 2018 for the World Meeting of Families.

Mr Kenny was speaking to press after his 23-minute meeting with the Pontiff in the Vatican, where he expressed his support for the Irish bishops’ invitation to the Pope to come and visit in two years’ time.

“The Pope has confirmed that he is coming to Ireland for the World Convention of Families – a fact that I appreciate very much as I welcome the invitation sent to him by the bishops. I explained to him that as head of the Catholic Church and head of the Vatican, the Government will make the appropriate arrangements for him,” Mr Kenny said.

The Taoiseach said the details of the visit and what they would entail were a matter for the Pope and the Irish bishops to agree on.

“If that means that he also travels to Northern Ireland, we will assist and co-operate in making whatever arrangements they want to arrive at,” he said.

Enda Kenny also said that relations between Ireland and the Vatican had improved in recent years.

In the wake of the publication of the Cloyne Report, Mr Kenny lashed out in 2011 at the “dysfunction, disconnection, elitism and narcissism” of the Vatican’s response to the clerical sexual abuse scandal.

The Government then announced it was closing its embassy to the Holy See. The move was reversed in 2014 with the re-opening of a smaller office under Ambassador Emma Madigan.

In a statement on Monday, Archbishop Diarmuid Martin of Dublin said he was very pleased to hear that Pope Francis had told the Taoiseach that he hopes to visit Ireland for a short visit for the World Meeting of Families in 2018.

Archbishop Martin said it confirmed the importance of the World Meeting for the Church in Ireland and around the world.

Preparations for the World Meeting are already underway and the Archbishop travelled to Rome yesterday for a meeting with Cardinal Kevin Farrell, head of the Pontifical Council for the Family, who will be planning the World Meeting, with the host diocese of Dublin.

Archbishop Martin said it was an important gift from Pope Francis to the Irish Church and the Church globally.

He said he welcomed the fact that the Taoiseach had reiterated the Government’s commitment to providing all appropriate arrangements in the event of Pope Francis coming to Ireland in August of 2018.

This will be the first papal visit to Ireland since Pope John Paul II arrived here in 1979.

On Monday’s Drivetime programme on RTE Radio, Archbishop Martin, who is President of the World Meeting of Families said, “The Pope had said to me early on that it was his intention to come to Ireland; I am glad that that intention is still firm. He will come for this World Meeting of Families which will be a big event and now with the announcement that the Pope will come the event will probably get bigger.”

The last World Meeting of Families took place in Philadelphia in 2015 and was attended by over a million people. “So certainly from my point of view the organisational side is quite daunting,” Dr Martin said.

However, he stressed this this papal visit will not be like the one in 1979, as Pope John Paul II was only 61 when he came to Ireland, whereas Pope Francis will be 81.

“Pope Francis also has a very different style; he will only do one or two major events in any day but then he will do other things. Anywhere Pope Francis has gone, he visits prisons and hospitals.”

According to the Archbishop, the WMF is basically a three-day conference followed by a major event on Saturday evening and an outdoor Mass on the Sunday, and the Pope is likely to participate in both of these. He added, “He will do other things in between.”

Recalling how it was at the end of the World Meeting of Families in Philadelphia that Pope Francis announced that the next location would be in Dublin, the Archbishop said, “Even on that occasion he told me that he had chosen Dublin. He has his own ideas as to why he wants to come to Ireland – he looks on it as a contribution he wishes to make to the renewal of the Church in Ireland and also to the renewal of family life in Ireland.”

Dr Martin said he believed that the Pope would be interested in visiting Northern Ireland as “a gesture of bringing communities together”.