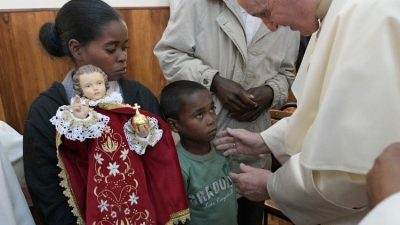 Survivors of one of the worst outbreaks of measles in recent years met with Pope Francis during the papal visit to Madagascar this week.

Since the outbreak began last September, the disease has infected more than 118,000 people and killed 1,688, most of whom were children under the age of 15. The disease has proved especially deadly because many young Madagascans are malnourished and suffer food poverty.

The Pope met with young survivors of the disease on Saturday after midday prayers at the Cathedral of Mary, Queen of the World, in Morondova, the capital of the island nation.

The disease continues to spread in Madagascar because immunisation levels are low. However, health officials say that the disease’s spread is slowing down. Only 58 per cent of Madagascans have been vaccinated against measles.

In Ireland, measles is on the rise. Cases of the disease have more than tripled from 25 in 2017 to 86 in 2018. Public health officials are concerned because vaccination rates are falling.

Ireland’s Minister for Health, Simon Harris, says the fall in vaccination rates has allowed “diseases that were largely consigned to history to make a comeback”.

In the United States, measles was declared eliminated in 2000, but currently the US is suffering its worst outbreak in quarter of a century. Some American Catholics have refused to take part in immunisation programmes because some particular programmes use vaccines developed using cell lines derived from aborted foetal tissue.

In Ireland, the proportion of children aged between four and five years who have been immunised with the MMR (measles, mumps and rubella) vaccine is about 91.2 per cent, according to the Irish government’s Health Protection Surveillance Centre.

Not only can measles be deadly, those who survive it are often permanently damaged. One in 10 measles survivors will suffer brain damage or hearing loss.