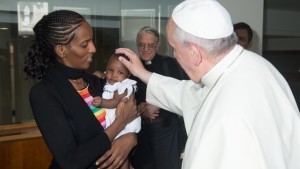 Sudanese Christian Meriam Yahia Ibrahim Ishag who was sentenced to death in Sudan for ‘renouncing Islam’ met Pope Francis on Thursday in the Vatican.

In a statement, the Vatican said Meriam Yahia Ibrahim Ishag and her family were received by the pontiff for a 30-minute meeting during which he thanked her for her “courageous testament of faith” and her “tenacity”.

The 27-year-old and her husband Daniel Wani and their two children were flown to Rome’s Ciampino airport on Thursday.

Italy’s deputy minister for foreign affairs, Lapo Pistelli, accompanied them while the Italian Prime Minister, Matteo Renzi, met them at the airport and told them, “Today is a day of celebration.”

From the airport Ms Ibrahim and her family were taken to the Domus Sanctae Marthae in the Vatican.

Vatican spokesman, Fr Federico Lombardi, told journalists that the encounter in the Pope’s residence was marked by “affection” and “great serenity and joy.”

They had “a beautiful conversation,” during which the Pope thanked Ms Ibrahim for “her steadfast witness of faith,” Fr Lombardi said.

Ms Ibrahim and her husband thanked Pope Francis for the “great support and comfort” they had taken from the Pope’s and many other believers’ prayers.

According to the Vatican, the meeting was “a sign” of the Pope’s “closeness and solidarity for all those who suffer for their faith, in particular Christians who suffer persecution.”

The Pontiff gave Ms Ibrahim and Daniel Wani a rosary beads after chatting about their plans for life in the US, where they are expected to fly in a few days’ time.

Meriam Ibrahim was sentenced to death over charges of apostasy, because her father was a Muslim, though he abandoned the family and she was brought up a Christian by her mother.

She married her husband, a Christian, in a church ceremony in 2011.

She was told if she accepted Islam she would be freed, but she told the court she would never apostatize from her Christian faith.

Her death sentence was overturned in June, but she was then stopped at the airport and blocked from leaving the country by Sudanese officials who questioned the validity of her travel documents.