Pope Francis leads the way in 24 hours for the Lord 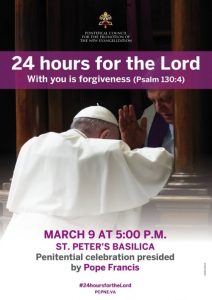 Today at 4 pm Irish time, a penitential liturgy will be celebrated in the Vatican’s St Peter’s Basilica, led by Pope Francis. In a ceremony where the Pope normally goes to Confession himself, and hears the confessions of a number of penitents afterwards, he will launch the ‘24 Hours for the Lord’ initiative. The ceremony will be streamed live at www.news.va.

The idea is for churches around the world to have Eucharistic Adoration for 24 hours, and to have priests available to hear confessions during that time. Pope Francis introduced the initiative in 2014 and it has been gathering momentum since then.

“The confessional is a place of forgiveness, not threats,” the Pope stressed during a recent homily at a Mass in Casa Santa Marta in the Vatican.

“The Lord says, ‘Come now, let us reason together, Let’s talk for a while.’ He doesn’t frighten us. He is like a father of a small child who has pulled a prank, and he has to correct him. And he knows that if he approaches him with a stick in hand, things will not go well. He has to approach him with trust and confidence,” said the Pope.

This is how the Lord calls us, he continued. “‘Come on, let’s have a coffee together. Let’s talk this over, let’s discuss it. Don’t be afraid, I’m not going to beat you.’ And since he knows his child is thinking, ‘But I did something wrong…’, he immediately [adds], ‘Even if your sins be like scarlet, they may become white as snow. If they be crimson red, they may become like wool.’”

In Ireland, ‘24 hours for the Lord’ will be celebrated from 4 pm today (Friday) until 4 pm tomorrow (Saturday) in churches around the country. In their spring statement, the Catholic bishops asked that it be dedicated to the “prayerful support for the protection of life from the moment of conception until natural death”. They advised people who wish to take part to consult their diocesan websites, which list the churches hosting ‘24 hours for the Lord’. 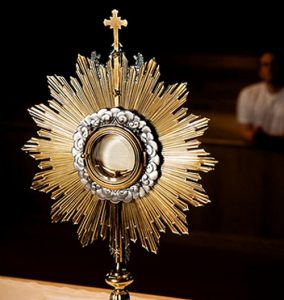 “‘24 hours for the Lord’ is an invitation by Pope Francis, who will be taking part in this special day of prayer and reconciliation in Rome,” explained Bishop Brendan Leahy of Limerick. “He is encouraging people to, in particular, go to Confession to acknowledge the wrong they have done but also in the knowledge that God forgives.”

In Limerick the event will take place at the Augustinian church, where a confessor will be available at all times. “I would encourage people to take part,” said Bishop Leahy, “not least those who have lost touch with the sacrament of Confession. It really is a special day and night of reconciliation and something that people gain a lot more than they expect from.”

In the diocese of Kildare and Leighlin, ‘24 hours for the Lord’ takes place in the parishes of Portlaoise, Rhode, Allen, Newbridge, Rathvilly and Bagenalstown. Details of locations in other dioceses are on diocesan websites.