Pope Francis “has gradually been putting women into positions of power” 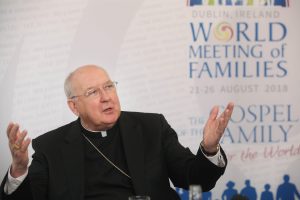 Pic shows Cardinal Kevin Farrell, Prefect of the Vatican Dicastery for Laity, Family and Life speaking to the media at the conference in the Helix Dublin. Pic John Mc Elroy.

The Prefect of the Dicastery for Laity, Family and Life has said Pope Francis is gradually putting women into positions of power in the Vatican.

In an interview published in the current edition of Intercom, the Irish bishops’ liturgical and pastoral magazine, Cardinal Kevin Farrell has spoken about the importance of the laity and the appointment of women to the Roman Curia.

According to the Dublin-born former Bishop of Dallas, when he came to Rome first Pope Francis told him “I don’t want any priests as undersecretaries in Laity, Family and Life; I want lay people.”

At the time there were 11 priests working in the department and two lay people who were women and worked as secretaries.

The Pope told him “I’ll give you two years.” Pope Francis himself suggested the names of two people he said should be interviewed.

Cardinal Farrell told Intercom, “I interviewed both of them; one didn’t take the job, the other did. So here we appointed two undersecretaries, positions that were always held by priests who were at least twenty years in the Vatican.”

The two undersecretaries are Gabriella Gambino, a research doctor in bioethics at the University of Rome at Tor Vergata. The other is Linda Ghisoni, who has a doctorate in theology and lectures in canon law.

The Cardinal also highlighted the significance of Pope Francis’ appointment of women as consultors at the Congregation for the Doctrine of Faith last April.

Describing the CDF as the “powerhouse” of the Vatican, Cardinal Farrell noted that for the first time the Pope had appointed three women as consultors, including Linda Ghisoni from the Dicastery of Laity, Family and Life.

The Cardinal recalled a conversation he had with Pope Francis on the role of women in the Church in the US.

“Francis was surprised to find out that on the senior staff of my diocese, we had fifteen people, only three of whom were men. The chancellor of the diocese has been a woman for twenty years; the vicar general is out and about and has nothing to do with administration or the care of the priests, because he has other things to do. The marriage tribunal were mostly women – all canon lawyers.”

But Cardinal Farrell also emphasised that these appointments were not about turning women into clerics.

“They have to be people of the world who live in the world. Neither of the two women I’ve mentioned, and none of the three women who were appointed to the Doctrine for the Faith are consecrated members of lay communities. They are married women.”

He added, “Gradually, this will happen at all levels of the Church if we follow Pope Francis’ lead. And he is effectively the one who appoints at the level of undersecretary. He also realises that the Roman Curia is overloaded with clerics, and it shouldn’t be like that.”

Administrative functions, he said, within the Church can be done by anybody. They have mainly been done by priests but they can be done by lay people too.