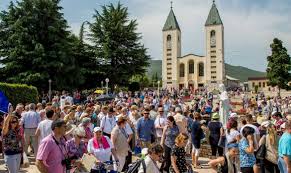 On his way back to Rome from one Marian shrine – Fatima in Portugal – Pope Francis cast doubt on another, Medjugorje in Bosnia.

Pope Francis was in Fatima to canonise two of the Fatima visionaries, Francisco and Jacinta Marto who, along with their cousin Lucia Santos, saw apparitions of and spoke with Our Lady in 1917.

At the end of any of his papal trips, Pope Francis has made it customary to hold an impromptu press conference with the journalists on board his flight. This time he was asked what was his opinion on Medjugorje and the reported visions there. In short, did the Pope believe there were genuine apparitions of Our Lady there?

In contrast with Fatima, where Our Lady appeared on six occasions in the space of six months, in Medjugorje it is claimed that Our Lady has been appearing to visionaries on a daily basis since July 1981. Of the six Medjugorje visionaries, three – Ivanka Ivankovic, Jakov Colo and Mirjana Dragicevic – claim to receive annual messages from Our Lady, while a fourth, Vicka Ivankovic, claims to receive a message on the 25th of every month.

In his reply the Pope said that he had personal doubts that went beyond those expressed in an official report by a commission headed by Cardinal Camillo Ruini in 2013. Describing the Ruini report as “very, very good”, the Pope said it distinguished  between the early claims of apparitions in Medjugorje in 1981 and the claims made for continuing apparitions today. He said the report said the early claims needed further investigation, but it had doubts about the current claims.

“Personally, I am more negative,” the Pope said. “I prefer the Madonna as our Mother and not a woman who acts like the head of a telegraph office who everyday sends a message at an appointed hour. This is not the Mother of Jesus. And these presumed apparitions don’t have a lot of value. This I say as a personal opinion.

“Who thinks that the Madonna says ‘Come tomorrow at this time and at such time I will say a message to that seer’? No!”

Tens of thousands of pilgrims visit Medjugorje each year, including hundreds of Irish people. Many of these report seeing visions and supernatural events themselves, such as a dancing sun or bright lights in the sky. However, some argue that these visions are usually seen by pilgrims who have been fasting and who have been out in the hot sun.

In his in-flight press conference, the Pope did acknowledge that Medjugorje was a place where people do experience a spiritual conversion, do encounter God and do change their lives.

Bishop Henryk Hoser of Poland has been sent by Pope Francis as a special envoy to Medjugorje to investigate the pastoral situation there and to see how the needs of pilgrims are being served.