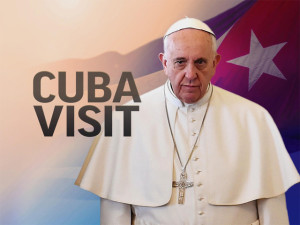 The head of the Vatican Press Office, Fr Federico Lombardi, said the meeting was “familiar and informal” and the two men spoke about “protecting the environment and the great problems of the contemporary world.”

Fr Lombardi compared the private encounter to that which took place with Pope Benedict XVI in 2012, saying Fidel Castro asked Pope Benedict many questions, while Sunday’s meeting with Pope Francis was “more of a conversation”.

The visit of Pope Francis to Cuba is the third visit of a Pope to this nation. The journey of the Holy Father comes amid an easing of tensions between Cuba and the United States.

Pope Francis began his apostolic visit on Saturday, touching down in the capital Havana where he was greeted by the country’s president Raúl Castro, other authorities, and bishops.

The Holy Father’s 19-22 September visit to the island nation coincides with the eightieth anniversary of the renewal of diplomatic relations between the Republic of Cuba and the Holy See.

This year, the country also celebrates one hundred years since our Lady of Charity of El Cobre was named patroness of Cuba by Pope Benedict XV.

Pope Francis is the third pontiff to go to the Caribbean nation, which was visited by Saint John Paul II in 1998, and Pope Emeritus Benedict XVI in 2012.

Speaking at Vespers in Havana’s Cathedral on Sunday evening, Pope Francis put aside his prepared homily and spoke from the heart to priests, religious and seminarians, urging them to be “a poor Church” and to “never tire of showing mercy” to others.

The Pope’s words came in response to two opening addresses from the Cardinal Archbishop of Havana, Jaime Ortega, who spoke about the Church in Cuba as poor in resources but rich in solidarity and fraternity.

Young nun, Sr Yaileny Ponce Torres, talked about her work at a government-run centre for 200 patients suffering from mental and physical traumas.

The Pope thanked all religious who care for the abandoned, the sick and those whom society would like to “throw away”, reminding them of Jesus words: ‘Whatever you did for the least of my brothers, you did for me’.

On the first full day of his apostolic visit Pope Francis celebrated the Sunday Mass in Havana’s Plaza de la Revolución, focusing on the theme of service.

As the Holy Father arrived in the Plaza, he stopped along the way to bless and embrace several young people with special needs, a gesture to which he gave voice in his homily stating that “Serving others chiefly means caring for their vulnerability.”

The Pope also praised the Cuban people’s love of beauty, saying “God’s holy and faithful people in Cuba is a people with a taste for parties, for friendship, for beautiful things.”

In his homily, the Pope told the massive crowd assembled to see him that the call to serve involves caring for the vulnerable of our families, our society, our people.

“Theirs are the suffering, fragile and downcast faces which Jesus tells us specifically to look at and which he asks us to love. With a love which takes shape in our actions and decisions,” he said.

Elsewhere, the Pontiff said being a Christian entails promoting the dignity of our brothers and sisters, fighting for it, living for it.

“That is why Christians are constantly called to set aside their own wishes and desires, their pursuit of power, and to look instead to those who are most vulnerable.”

“This caring for others out of love is not about being servile.  Rather, it means putting our brothers and sisters at the centre.”

He said “service always looks to their faces, touches their flesh, senses their closeness and even, in some cases, suffers in trying to help. Service is never ideological, for we do not serve ideas, we serve people.”