Pope Francis has called for bishops to observe “zero tolerance” for abuse, oppression and exploitation of children.

In a letter to the bishops of the world, and signed on the Feast of the Holy Innocents, 28 December, the Pope addresses the many deprivations and abuses suffered by children in today’s world, including sexual abuse by priests.

In the letter he refers to minors who were abused sexually by priests, stating: “It is a sin that shames us. Persons responsible for the protection of those children destroyed their dignity. We regret this deeply and we beg forgiveness.”

He states that the Church weeps for this sin: “The sin of what happened, the sin of failing to help, the sin of covering up and denial, the sin of the abuse of power. The Church also weeps bitterly over this sin of her sons and she asks forgiveness.”

He asks the bishops to renew complete commitment to ensuring that these “atrocities” will no longer take place in the midst of the Church.

“Let us find the courage needed to take all necessary measures and to protect in every way the lives of our children, so that such crimes may never be repeated. In this area, let us adhere, clearly and faithfully, to ‘zero tolerance’,” he states. 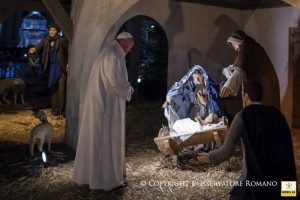 The Holy Father begins his letter writing about the joy that comes from the proclamation of the birth of Christ but writes that the Christmas story is also accompanied by tears.

He states that “In our world – I write this with a heavy heart – we continue to hear the lamentation of so many mothers, of so many families, for the death of their children, their innocent children.”

He adds that to contemplate the manger also means to contemplate this cry of pain, to open eyes and ears “to what is going on around us, and to let our hearts be attentive and open to the pain of our neighbours, especially where children are involved. It also means realizing that that sad chapter in history is still being written today.”

Offering Saint Joseph as a role model, he asks pastors to both hear God’s voice and become more conscious of what is going on around them, and to interpret these events realistically.

He urges the pastors to protect the joy of the Christmas message from the “Herods of our own time” who “devour” the innocence of children through illegal slave labour, prostitution and exploitation, wars and forced immigration. 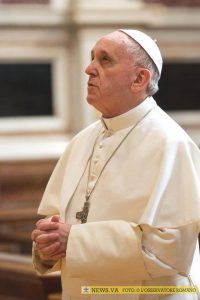 He quotes current statistics which show that 75 million children in emergency and crisis situations have had to interrupt their education. In 2015, some 68 per cent of those who were sexually exploited were children. One third of all children who have to live outside their homelands have been forcibly displaced. Almost half of the children who die under the age of five do so because of malnutrition. It is estimated that in 2016 there were 150 million child labourers, many of whom live in conditions of slavery.

The future is also bleak according to the most recent report by UNICEF, which shows that unless the world situation changes, by 2030 there will be 167 million children living in extreme poverty, 69 million children under the age of five will die between 2016 and 2030, and 16 million children will not receive basic schooling.

Pope Francis states that the bishops must find new courage to protect children and to be more sensitive to what is happening in the world around them.