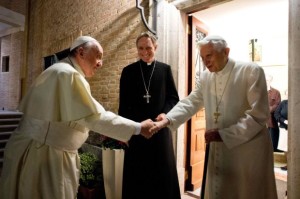 Pope Francis paid a visit on his predecessor, Pope Emeritus Benedict XVI, on Monday afternoon to offer his Christmas wishes.

Benedict XVI met his successor at the door of his residence in the Mater Ecclesiae monastery at 5pm on Monday.

“It’s a pleasure to see you looking so well,” Pope Francis told his 86-year-old predecessor.

The two Popes then spent time in prayer together in the chapel in the residence.

Afterwards they spent half an hour in private conversation.

As Pope Francis left Benedict XVI, he wished him a happy Christmas and said, “Pray for me.”

Pope Francis also met the staff of the Mater Ecclesiae, Mgr Georg Gänswein and the four women of the ‘Memores Domini’ lay association.

He offered Christmas blessings to all before his departure.