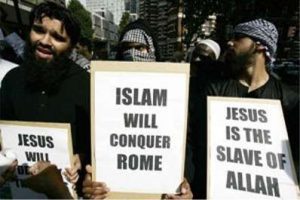 Pope Francis will today celebrate Mass for murdered French priest, Fr Jacques Hamel of Rouen, who was martyred by Islamist extremists while saying Mass in a small French village.

According to the Vatican, the Mass is a sign of the Pope’s nearness to the relatives and friends of Fr Hamel and to the community of Rouen, France.

Archbishop Dominque Lebrun of Rouen, along with 80 other pilgrims from the diocese, will participate in the Mass in the chapel of Casa Santa Marta at 7am Rome time.

Fr Hamel was slain by two Muslims professing allegiance to Daesh in the Church of Saint-Etienne-du-Rouvray on 26 July 2016.

Separately, Cardinal Christoph Schönborn of Vienna on Sunday warned his congregation that “Europe is on the verge of forfeiting its Christian heritage” and that “many” Muslims want that as they believe European culture is exhausted and “Europe is finished.”

The Viennese cardinal asked the large congregation gathered in St Stephen’s cathedral church: “Will there be an Islamic conquest of Europe?”

The Mass on 9/11 commemorated the Catholic feast of the “Holy Name of Mary,” which was instituted 332 years ago in gratitude for the liberation of Vienna from the Ottoman Turks.

The Battle of Vienna, between Christian forces and 90,000 Islamic invaders, was waged on 11-12 September 1683, and marked the turning point in Europe’s 300-year struggle against Islam.

The feast also coincided with the tenth anniversary of Pope Benedict XVI’s historic Regensburg Address in which he spoke of the importance of the relationship between faith and reason, highlighting the differences between the Christian understanding of God and the Muslim concept of Allah.

Whereas for Christians, “not to act in accordance with reason is contrary to God’s nature,” Pope Benedict said in 2006, “for Muslim teaching, God is absolutely transcendent. His will is not bound up with any of our categories, even that of rationality.”

Benedict offered these reflections after having quoted a 14th century Byzantine emperor Manuel II Paleologus regarding the place of violence in Islamic practice.

“Show me just what Mohammed brought that was new, and there you will find things only evil and inhuman, such as his command to spread by the sword the faith he preached,” the citation ran.

Benedict acknowledged that the emperor spoke with a “startling brusqueness” which today “we find unacceptable”.

However, his citation of the ancient 14th century text set off a wave of Muslim attacks in retaliation.

These included the killing of a nun in Somalia and the firebombing of five churches in the West Bank and Gaza Strip.