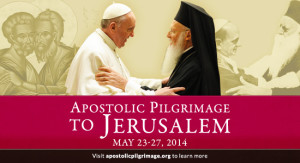 Pope Francis and the Ecumenical Patriarch, Bartholomew I, held private talks in Jerusalem on Sunday afternoon during which they signed a Common Declaration.

In the joint Declaration they pledge to continue on the path towards unity between the Catholic and Orthodox Churches.

Their encounter on Sunday marked the 50th anniversary of the historic meeting between Pope Paul VI and the Patriarch Athenagoras in 1964.

Pope Francis and Patriarch Bartholomew said it is their duty to work together to protect human dignity and the family and to build a just and humane society in which nobody feels excluded.

They also stressed the need to safeguard God’s creation and the right of religious freedom.

The two leaders expressed concern over the situation facing Christians in the context of the Middle East’s conflicts and they spoke of the urgency that compels them to seek the reconciliation and unity of the human family whilst fully respecting legitimate differences.

Separately, Pope Francis lamented the “tragic” divisions between Christians and said disagreements must not paralyse their progress towards unity.

His remarks were made during an ecumenical prayer service held with the Ecumenical Patriarch Bartholomew I and other Christian leaders at the Basilica of the Holy Sepulchre in Jerusalem.

Earlier on Sunday, the Pontiff, accompanied by President Abbas, was greeted by various representatives of the Palestinian Christian communities from the West Bank and the Gaza Strip.

In his address to the Palestinian authorities and members of the Diplomatic Corps, the Pope said: “For decades the Middle East has known the tragic consequences of a protracted conflict which has inflicted many wounds so difficult to heal.”

“Even in the absence of violence, the climate of instability and a lack of mutual understanding have produced insecurity, the violation of rights, isolation and the flight of entire communities, conflicts, shortages and sufferings of every sort.”

“In expressing my closeness to those who suffer most from this conflict, I wish to state my heartfelt conviction that the time has come to put an end to this situation which has become increasingly unacceptable.”

For the good of all, there is a need to intensify efforts and initiatives aimed at creating the conditions for a stable peace based on justice, on the recognition of the rights of every individual, and on mutual security.

The time has come for everyone to find the courage to be generous and creative in the service of the common good, the courage to forge a peace which rests on the acknowledgement by all of the right of two States to exist and to live in peace and security within internationally recognized borders.”

“To this end, I can only express my profound hope that all will refrain from initiatives and actions which contradict the stated desire to reach a true agreement, and that peace will be pursued with tireless determination and tenacity. Peace will bring countless benefits for the peoples of this region and for the world as a whole. And so it must resolutely be pursued, even if each side has to make certain sacrifices”, he emphasised.

“I pray that the Palestinian and Israeli peoples and their respective leaders will undertake this promising journey of peace with the same courage and steadfastness needed for every journey.”

Pope Francis made an unscheduled stop on Sunday morning to pray at Israel’s security barrier on the way to Bethlehem where he celebrated Mass in Manger Square.

His car suddenly stopped and he got out and walked through the crowds to stand in front of the barrier and pray before it.

As people swarmed around him with i-phones trying to capture the image, the Pope stood for several minutes in silent prayer at the foot of eight-metre high wall which continues for hundreds of kilometres through Palestinian territory, dividing communities or cutting them off from their land and scarce water supplies.

In Bethlehem’s Manger Square, next to the Church of the Nativity, the Pontiff focused his homily on the Child Jesus and on children who are “a sign of hope, a sign of life, but also a “diagnostic” sign, a marker indicating the health of families, society and the entire world”.

In a speech at Tel Aviv airport where he was greeted by President Shimon Peres and Israeli Prime Minister, Benjamin Netanyahu, Pope Francis expressed support for “the right of the State of Israel to exist and to flourish in peace and security within internationally recognised boundaries”.

However, he said there must be “recognition of the right of the Palestinian people to a sovereign homeland and their right to live with dignity and with freedom of movement”.

The Pope also recalled the Holocaust, using the Hebrew word for the term, Shoah, and said that “ever mindful of the past” there can be “no place for anti-Semitism”.

“A particularly moving part of my stay will be my visit to the Yad Vashem Memorial to the six million Jews who were victims of the Shoah,” the Pontiff said. “I beg God that there will never be another such crime, which also counted among its victims many Christians and others.”