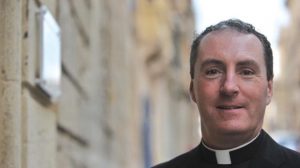 An Irish priest, who was ordained for the archdiocese of Dublin, has been chosen by Pope Francis to oversee the disciplinary section of the Congregation for the Doctrine of the Faith in the Vatican.

The Holy See announced on Tuesday that Mgr John Kennedy from Clontarf in Dublin, who was ordained in 1993, will head up the CDF section that processes clerical sex abuse cases.

Mgr Kennedy was an assistant to the previous head of the section, Fr Miguel Funes Diaz, who is one of three CDF officials who recently departed the congregation.

The announcement follows the resignation of clerical abuse survivor, Marie Collins, from the Vatican’s Pontifical Commission for the Protection of Minors on 1 March over her frustration with resistance to reform from the Curia.

In the middle of March, Mrs Collins wrote an open letter to the Prefect of the Congregation for the Doctrine of the Faith (CDF), Cardinal Gerhard Müller, warning him that dysfunction can no longer be kept hidden behind institutional closed doors.

Forty-nine-year-old Mgr Kennedy trained for the priesthood at Clonliffe College. He was ordained in 1993 and is a graduate of University College Dublin.

He served in parishes in Crumlin and Francis Street in Dublin before undertaking postgraduate studies in canon law in Rome in 1998, where he lived at the Teutonic College in the Vatican, located between the audience hall and St Peter’s Basilica.

He began his service with the Holy See in September 2002 under the then Prefect of the CDF, Cardinal Joseph Ratzinger, later Pope Benedict XVI.

The CDF took over responsibility for dealing with clerical child abuse cases in 2001 at the instigation of Cardinal Ratzinger, who felt that dioceses weren’t disciplining clerical abusers as church law required.

From then on, bishops and religious superiors were required to submit all credible accusations against priests and religious to the CDF, which then determined how to proceed.

Following the resignation of Marie Collins, Cardinal Sean O’Malley, who heads up the Pontifical Commission for the Protection of Minors, said in an interview that the CDF needed more resources to deal with the abuse caseload.

In an interview with the Zenit news agency following the resignation of Pope Benedict XVI in 2013, Mgr Kennedy recalled his former boss as a “shy, but extremely intelligent man, a person who was very sincere, very gentle”.

“I remember when my mother turned 60, I asked if it would be possible for her to meet him, and he said, “Oh yes, bring her in at a quarter to one.” I brought her in and they sat like two friends on the sofa in his private office, and had a good old chat for about fifteen or twenty minutes. He was very kind. He was very gracious. He’d remember details about you, and years later he’d be able to say: How is that situation, or how is that person that I met years ago?”