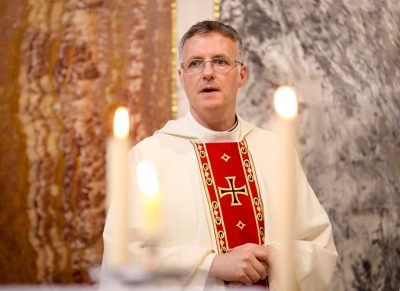 Pope Francis has appointed Fr Michael Duignan, a priest of the Diocese of Elphin, as the new Bishop of Clonfert.

News of the announcement was made this morning in St Brendan’s Cathedral, Loughrea, by the Papal Nuncio to Ireland, Archbishop Jude Thaddeus Okolo, and simultaneously in Rome.

The Bishop-elect turned 49 on Monday and on Wednesday he celebrates the silver jubilee of his ordination to the priesthood.

He is a native of Bealnamulla, Athlone, Co Roscommon, and the eldest of a family of six.

In a statement, the Primate of All Ireland, Archbishop Eamon Martin, welcomed the news of the appointment and paid tribute to Fr Duignan’s varied pastoral experience in the diocese of Elphin, particularly during his time in St Angela’s College in Sligo, which he said would bring rich experience to bear upon his new responsibilities as a diocesan bishop.

Speaking after the announcement, Fr Duignan highlighted that he and Bishop John Kirby, whom he succeeds, come from the same parish in Athlone and that Bishop Kirby was present at his ordination 25 years ago.

Paying tribute to Dr Kirby, he said Clonfert Diocese owed him a debt of gratitude for more than 30 years of faithful ministry. He also paid tribute to the retiring bishop’s contribution at a national level with Trócaire and the Episcopal Conference.

Bishop Kirby highlighted Fr Duignan’s involvement in education and administration in Elphin. The bishop-elect was director of religious education, theology and chaplaincy in St Angela’s College and was chair of the board of management of Summerhill College, Sligo.

Last August, he chaired the liturgy committee for the visit of Pope Francis to Knock Shrine. He has also been involved in organising young adults and students in preparations for various World Youth Day events.

He has given training and formation programmes for parish pastoral councils, liturgy groups, eucharistic ministers and ministers of the Word. 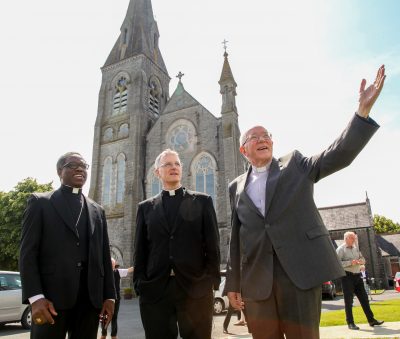 Fr Duignan said the Diocese of Clonfert had an ancient and rich spiritual tradition that has always nurtured places of prayer. Over the next few days he intended to visit two such places to ask for prayers “as we begin this new chapter on the great pilgrimage of life”.

These were the Carmelite Sisters in Loughrea and the Emmanuel House of Providence in the village of Clonfert.

Bishop Kevin Doran congratulated one of the youngest priests in the Diocese of Elphin, and said he had “made an enormous contribution to the mission of the diocese, particularly in the area of education”.

“[He] has been an important formative influence in the lives of a whole generation of young teachers of religious education.”

Fr Duignan also guided the process of establishing the Permanent Diaconate in Elphin, one of the first dioceses in Ireland in which the ministry was established in modern times.

In addition to serving as chancellor and diocesan secretary, he also took on the role of episcopal vicar for education.

“In exercising that role, he has travelled the length and breadth of the diocese, supporting teachers and boards of management in their mission of providing quality education in the spirit of the Gospel,” Bishop Doran said.

“One of the primary responsibilities of a bishop is to celebrate the Liturgy for the people. Fr Michael is a prayerful celebrant of the Eucharist and the Sacraments and, in 2018, played a significant role in preparing the Liturgy for the visit of Pope Francis to Knock Shrine.” 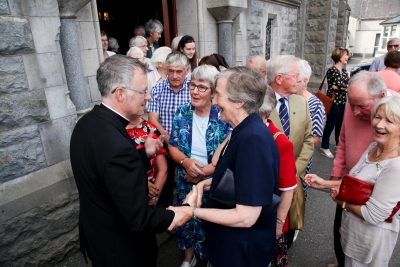 He began his seminary formation for the Diocese of Elphin with a spiritual year at St Patrick’s Missionary Society in Kiltegan, Co Wicklow. His studies continued at the Pontifical Irish College in Rome where he attended the Pontifical Gregorian University. He graduated with a Baccalaureate in Philosophy in 1990 and a Baccalaureate in Theology in 1993. As a postgraduate student he completed a Licentiate in Dogmatic Theology in 1995.

After completing his Licentiate, he ministered as curate in the cathedral parish of St Mary’s, Sligo, and subsequently as chaplain to the Institute of Technology, Sligo, before returning to Rome to complete doctoral studies in contemporary trinitarian theology at the Pontifical Gregorian University with Fr Gerald O’Collins SJ.

Returning to Ireland, he ministered as curate in the parish of Ahamlish and Innismurray, Cliffoney, Co Sligo, and began teaching theology, philosophy and religious education at St Angela’s College (A College of NUI, Galway), Cloghereevagh, Co Sligo.

Subsequently he was appointed director of religious education, theology and chaplaincy programmes at St Angela’s College, teaching primarily in the areas of fundamental and systematic theology, pastoral studies and liturgy.

He was involved in the development and delivery of outreach programmes in theology, religious education and pastoral studies in Roscommon, Knock, Carrick-on-Shannon, Athlone, Letterkenny and at NUIG, Galway and the Newman Institute, Ballina.

Since 2009, he has served as Chair of the board of management of the College of the Immaculate Conception, Summerhill, Sligo, the largest post-primary school for boys in Connaught.

In 2014, he was appointed by Bishop Kevin Doran as chancellor and diocesan secretary of the Diocese of Elphin, Episcopal Vicar for education and formation and in 2018 as diocesan financial administrator. As Episcopal Vicar for education, he took a lead role in the establishment of Coláiste Chiaráin, Summerhill, Athlone and St Comán’s Wood Primary School, Roscommon Town.

In 2015, he led the new initiative to recruit and form diocesan catechists for ministry in the Diocese of Elphin with the first cohort due to graduate in 2020.

He was a member of the Theological Commission of the Archdiocese of Omaha, Nebraska convened for the cause for canonisation of the Servant of God, Father Edward J. Flanagan (a native of the Diocese of Elphin). He has also been involved in training and formation programmes for parish pastoral councils, liturgy groups, eucharistic ministers and ministers of the Word.

He served as spiritual director to youth faith groups such as Youth 2000 Ireland, Elation Ministries and has worked with organising young adult and student involvement in International World Youth Day celebrations, youth pilgrimages and events.

Fr Duignan is a member of the Knock Shrine Management Advisory Board and the Knock Shrine Faith Renewal Council. He chaired the liturgy committee for the visit of Pope Francis to Knock Shrine in 2018. In September 2018, he was elected president of the Oliver Plunkett Union of Past Students of the Pontifical Irish College, Rome.

Along with his doctoral dissertation, he has published various articles and homilies on theology, the Permanent Diaconate and pastoral issues. Outside of his academic and pastoral work his interests include music, reading, travel, cooking and spending time with family and friends.