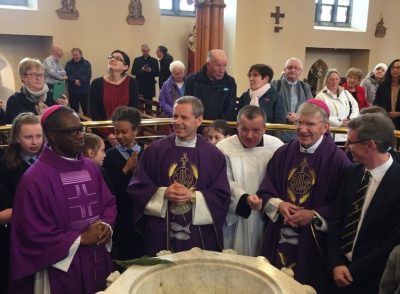 Fr Gavin is currently Chancellor of the Archdiocese of Dublin and a highly regarded canon lawyer.

He also serves as a member of the Case Management Committee of the National Board for Safeguarding of Children in the Catholic Church in Ireland (NBSCCCI).

Announcing the news in the Cathedral of Saint Mary & Saint Anne in Cork City, the Papal Nuncio, Archbishop Jude Thaddeus Okolo, described it as “very special in the life of the people of God in Cork and Ross”.

Bishop John Buckley served the diocese for over thirty-five years, initially as an auxiliary bishop from 1984-1997 and thereafter as bishop of the diocese.

In his address to the congregation gathered in St Mary & St Anne’s, Bishop-elect Gavin said he was, “conscious of those who have felt let down by the Church and are just ‘hanging in there’.” He encouraged them “not to give up”.

The 53-year-old also admitted, “I cannot pretend that leaving my life and ministry in Dublin will be easy.”

“I was very happily serving the Church as an ordinary priest in the Archdiocese of Dublin during the last 27 years since I was ordained in various different ministries. And as a North Side Dubliner I would never have expected such trust to be placed in me by Pope Francis by asking me to serve as a humble servant leader, the People of God, the Body of Christ of the Diocese of Cork & Ross.”

Welcoming his successor, Bishop Buckley described his appointment as “a new beginning”.

He also joked about the appointment of a Dubliner to Cork but stressed that the people of Cork would give him a ‘Céad Míle Fáilte’.

“It is a great honour for a Dublin man to be promoted to the real capital of Cork! We always think down here that there are only two categories of people in Ireland, Cork people and those who wish they were Cork people! You have now obtained your wish thanks to Pope Francis.”

Bishop Buckley said that the demands on the priests have been varied and challenging.

But in recent years, despite their increasing age profile and the constraints regarding personnel and the increasing population of their parishes, “the priests have continued to provide for their parishioners a full parish service,” he said.

He outlined the changing social context in Cork that the new bishop will face.

“At a time of unprecedented change in our country, particularly in recent years, Cork too has changed over the years, mushrooming housing estates, new motorways, expanding industrial plants, developments in education, communication and cultural activities.”

But despite growing materialism, the vast majority of people in Cork retain an affiliation with the Church, he said.

“People realise that technology cannot solve the hunger of the human heart. People are looking for something more satisfying than the consumer lifestyle. We see it in the handing on of the faith in the home, the appreciation of the importance of the family and in the work of teachers in the school.”

Archbishop Diarmuid Martin paid tribute to Fr Gavin’s ability to reach out to young people in the diocese of Dublin working with a variety of youth groups and young adults helping them to grow in faith in a variety of innovative ways.

Fr Gavin has worked closely with young adults through gospel choirs, World Youth Day and the ‘Second Chance Saturday’ initiative which encouraged those who had drifted form the Church to give their faith a second chance, reaching out through street ministry and offering social time and hospitality.

Recently he worked on the development of the Gospel Choir of Our Lady of Victories Parish in Ballymun in Dublin, which along with a young adult group, animates a Mass for young people in the parish every Sunday evening.

He has also led groups of young people to International World Youth Days in Madrid, Rio de Janeiro and Krakow.

Fr Gavin has served as a chaplain to the Dublin Diocesan Children’s Pilgrimage to Lourdes each year during Easter Week, involving travelling with a group of children with special needs and their helper volunteers, collaborating with leaders who plan, fundraise and train together as helpers.

Up to today’s appointment, Bishop-elect Gavin was in addition to being Chancellor in the Archdiocese of Dublin and parish chaplain in Ballymun and the parish grouping of Iona Road, Drumcondra, Glasnevin and Ballygall, also chaplain to the Italian-speaking community in Dublin and chaplain.

He is fluent in Italian and Spanish and enjoys keeping fit, walking, cooking – especially vegetarian, and gardening.

Welcoming his appointment, Archbishop Diarmuid Martin said, “Fr Gavin will be missed in our diocese where he is known for his experience, knowledge and personal warmth.”

“I am personally very pleased that his contribution has been recognised by Pope Francis and that he will have a an opportunity to bring his gifts and wide pastoral experience to the Diocese of Cork and Ross. He will be missed by all of us in Dublin but I know he will minister to the very best of his ability for the people of Cork and the wider Irish Church at the Bishops Conference level.”

Bishop-elect Gavin was born in Dublin on 1 January 1966 and baptised in St Andrew’s Parish, Westland Row, Dublin, on 5 January 1966.

He is the second eldest of seven brothers and sisters. His family roots are in Marino, Saint Vincent de Paul Parish, on the Northside of Dublin.

He played hurling and football with Saint Vincent’s GAA Club, Marino, and was a member of Marino Athletic Club.

Prior to his seminary formation in Clonliffe College, Bishop-elect Gavin had begun training as a residential social worker in Our Lady’s Hostel, Eccles Street, Dublin, from September 1983 – August 1984.

Bishop-elect Gavin was ordained to the diaconate by Archbishop Desmond Connell in the Church of the Holy Cross, Clonliffe, Drumcondra, on 11 March 1990.

He was ordained to serve as a priest of the Archdiocese by the Bishop Éamonn Walsh, Auxiliary Bishop of Dublin, and was appointed to the Saint Vincent de Paul Parish Church, Marino, Dublin, on 7 June 1991.