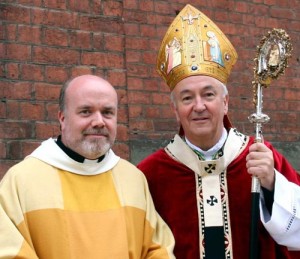 The secretary general of the Bishops Conference for England and Wales, Mgr Marcus Stock, has been selected by Pope Francis to lead the diocese of Leeds.

The announcement was made on Monday and welcomed by the leader of the Church in England and Wales, Cardinal Vincent Nichols, who said he welcomed “wholeheartedly” Pope Francis’ decision.

He assured Mgr Stock of his full support and prayers “as he prepares for this next step in his vocation of service in the Church.”

The diocese of Leeds, which is home to an estimated 150,000 Catholics, has been without a bishop since Archbishop Arthur Roche was appointed Secretary of the Vatican Congregation for Divine Worship and Discipline of the Sacraments in 2012.

Responding to the news, Bishop-Elect Stock said choosing an episcopal motto was not difficult as words spoken to him on the day he was ordained a deacon by the late Cardinal Basil Hume had stayed with him down the years.

He recalled in a statement that just before he made his solemn ordination promises, the late Cardinal Basil Hume said to him, “Let the words of Our Lord ring in your ears, ‘I have longed and longed to be with you’. Carry these words not only throughout your diaconate but into your priesthood; then, you will discover that peace, that joy, in the service of the servants of the Lord.”

Mgr Stock continued, “Since then, those words have been imprinted deep upon my heart. Desiderio desideravi, ‘I have longed and longed to be with you’, or ‘I have desired with desire to be with you’, the words as written in St Luke’s Gospel (22:15) which Our Lord spoke to his apostles as he sat down with them at the Last Supper.”

“During his homily, Cardinal Hume had used those words to express the great desire and intimacy with which Our Lord wishes to share His divine life and love with each one of us. That life and love is offered freely to all men and women.

If in faith we accept that life and love, we have no need to be afraid, we can bear all things, believe all things, hope all things, and endure all things. It is that message which I have tried to make central to my ministry as a priest and which I hope and pray will continue to be at the centre of my new ministry as a bishop. So, Desiderio desideravi will be my motto,” the 53-year-old said.

Cardinal Vincent Nichols responded to the news by saying that for the last five years he has been constantly grateful to the Archdiocese of Birmingham for releasing Mgr Marcus Stock to be the General Secretary of the Bishops’ Conference.

“The Diocese of Leeds is receiving a fine man as its new bishop. He will bring his many abilities to his new calling. They are well known and widely appreciated. Most importantly of all, he brings his deep love of the Lord and His Church, the true source of his dedication, sensitivity, generosity and stability,” he said.

Archbishop Bernard Longley of Birmingham described the appointment as “a wonderful blessing to the Diocese of Leeds and to the Church in England and Wales”.

The Archbishop also referred to the bishop-elect’s extensive pastoral experience as a priest in Birmingham for twenty-six years.

“His pastoral work in six parishes, his leadership of the Diocesan Education Service and his more recent work as General Secretary of the Bishops’ Conference of England and Wales will be a sure foundation for his new ministry In Leeds.”

The date of Bishop-elect Stock’s episcopal ordination has yet to be announced.

Mgr Stock was born in London in August 1961. He graduated in Theology from Oxford (1983) and then in Dogmatic Theology at the Pontifical Gregorian University (1988). He was ordained a priest for the Archdiocese of Birmingham on 13 August 13 1988.

He was assistant priest at the parish of Our Lady and St Brigid’s, Northfield; parish priest of St Birinus; from 1991 to 1994 pastor of Dochester-on-Thames and from 1994 to 1999 of St Peter’s, Bloxwich.

Since 2009, he has been Secretary General of the Episcopal Conference of England and Wales and Director of the Faculty of Theology at Heythrop College, London.

The Diocese of Leeds consists of the County of West Yorkshire and parts of North Yorkshire, parts of East Riding, Cumbria, Greater Manchester and Lancashire. It is within the Ecclesiastical Province of Liverpool.

For further information about the Diocese of Leeds see: http://www.dioceseofleeds.org.uk/