Pope Francis appeals for peace and reconciliation in Egypt 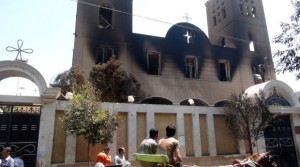 The facade of the Prince Tadros Coptic church in the central Egyptian city of Minya after it was torched by assailants. (Photo: Courtesy AFP/Getty Images)

Pope Francis on Sunday appealed for peace and reconciliation in Egypt as the death toll rose to 600 in the standoff between the military and its supporters and those of the deposed Islamist leader, Muhammed Morsi.

Speaking following the recitation of the Angelus from the papal apartments above St Peter’s Square in the Vatican, the Pope said the Church continued to pray for peace in Egypt together with Mary Queen of Peace.

The Pontiff warned that “the Gospel does not authorise the use of force to spread the faith. It is just the opposite: the true strength of the Christian is the power of truth and love, which leads to the renunciation of all violence,” he said. Pope Francis underlined that faith and violence “are incompatible.”

Over twenty Christian churches have been attacked in the recent violence and much of Egypt remains under curfew.

The Muslim Brotherhood has targeted Egypt’s Christians because the leadership of the Coptic Church, notably Pope Tawadros II supported the Army’s decision to force President Morsi out of office in order to bring about a new government.

According to the Coptic Catholic Patriarchate, more than 25 other attacks which have targeted Orthodox and evangelical churches have been reported.

Separately, the Coptic Church released a statement backing the country’s military-backed government, and criticising the western media for its coverage of the violence in Egypt.

Referring to perceived sympathy for the Muslim Brotherhood by western media outlets, the statement called on the West to “read objectively the facts of events, and not give international and political cover to these terrorists and bloody groups.”

“The Egyptian Coptic Church is following the unfortunate developments on the ground of our country Egypt and emphasises its strong stance with the Egyptian police, the armed forces and other organisations of the Egyptian people in the face of groups of armed violence and black terrorism,” the statement read.

It added, “While we appreciate the sincere and friendly position that understands the nature of the developments, we strongly deplore the media fallacies that are prevalent in Western countries.”

Egypt’s Coptic Christian community makes up around 10% of the country’s 80 million plus population. Copts are indigenous to Egypt, as their presence predates the Arab conquests of northern Africa.

They have long complained of widespread discrimination, persecution and violence by both the Egyptian state and Islamist non-state actors.

Anti-Christian violence has seriously escalated in the aftermath of the removal of President Morsi, whose supporters have been accused of scapegoating the Coptic community, after Pope Tawadros II came out in support of the move by the army to oust Morsi.