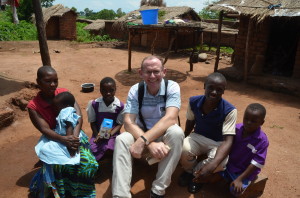 Pope Francis this morning announced the appointment of a priest of the archdiocese of Tuam as the new Bishop of Killaloe.

The announcement was made at the Cathedral of Ss Peter and Paul in Ennis, Co Clare by the papal nuncio, Archbishop Charles Brown.

The occasion was attended by Archbishop Kieran O’Reilly of Cashel and Emly, who was formerly Bishop of Killaloe; Bishop William Walsh, Bishop Emeritus of Killaloe and Fr Des Hillery, the diocesan administrator of Killaloe Diocese.

Fr Fintan Monahan is currently diocesan secretary in the archdiocese of Tuam and a member of the Communications Council of the Irish Episcopal Conference.

Bishop-elect Monahan is a fluent Irish speaker and is known to enjoy the outdoor life, hill walking, jogging, cycling, swimming and gardening.

The diocese of Killaloe has been without a bishop since the elevation of Dr Kieran O’Reilly as Archbishop of Cashel and Emly two years ago.

Speaking to representatives of his new diocese, Bishop-elect Monahan, who was ordained to the priesthood in Carraroe in 1991, said that having worked in a diocesan office for almost eleven years – “I know only too well the magnitude of the responsibilities and challenges that arrive on the desk of a bishop in Ireland today!”

Referring to the feast of Saint Martha, he said she was a model of service, hospitality and warmth and that the Gospel of the day sees Jesus encouraging her to develop the contemplative side of her spirit along with her hospitable nature.

“On this feast day, I pray for an abundance of both of these great qualities and gifts in my dealings with all to whom I minster in this diocese and everywhere, following the example of The Good Shepherd, Jesus Christ.”

Responding to the news, Archbishop Michael Neary welcomed the appointment saying Fr Monahan had served the Archdiocese of Tuam “very faithfully, with great dedication and distinction as a priest since his ordination 25 years ago”.

He described the 49-year-old priest as “a man of deep faith, integrity and humility, someone who radiates a great love for and joy in priesthood”.

Dr Neary added that all those qualities are very much appreciated by those to whom he ministers. “He brings great qualities of generosity, wholesomeness and leadership to his new responsibility.”

He also highlighted how being a bishop in the Ireland of today, “he will be confronted by many challenges” and added he believed that “with the grace of God and his own warm personality he will meet those challenges”.

While stressing that his appointment as Bishop of Killaloe is a huge loss to the Archdiocese of Tuam, the Archbishop said it was “a wonderful blessing to his new diocese and to the Church in Ireland at this time”.

In a statement on Friday morning, the Primate of All Ireland, Archbishop Eamon Martin offered his congratulations and prayerful good wishes to Fr Fintan Monahan on his appointment as Bishop of Killaloe today by Pope Francis.

He said Fr Monahan brings many pastoral and administrative gifts, including his outreach to young people, his promotion of vocations, his pastoral wisdom.

“All of these gifts and more besides – equip him well for his new tasks in Killaloe. As a valued member of the Council for Communications of the Episcopal Conference, Father Fintan is dedicated to harnessing new forms of media in order to proclaim the message of Jesus Christ to the contemporary world.”

The Archbishop of Armagh also thanked Fr Des Hillery for having carried out the duties as diocesan administrator of Killaloe for the past months in addition to his existing duties as parish priest of Nenagh.

“He has faithfully represented the diocese at the Episcopal Conference and has offered wise and prudent contributions to our discussion.”

Archbishop Kieran O’Reilly, whom Bishop-elect Monahan succeeds in Killaloe also paid tribute to the many gifts Fr Monahan brings with him to his new role.

He said that having worked for many years as diocesan secretary he is familiar with all that comes with a busy diocesan office.

“In addition to his work in promoting and encouraging vocations to the priesthood, Father Fintan is recognised as having invested much energy and leadership in the area of communications and especially in the area of digital media.”

After completing postgraduate studies in theology, Fr Fintan ministered in An Tulach in the parish of An Cnoc Indreabhán before being appointed to the teaching staff of St Jarlath’s College, Tuam. Since 2006 he has served the diocese as diocesan secretary.

Life and ministry of Bishop-elect Monahan