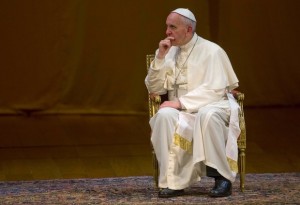 The Vatican has confirmed that Pope Francis will address the European Parliament in November.

The President of the Parliament, Martin Schulz, on Thursday morning informed the Conference of Presidents, made up of the leaders of the political groups, that the Pope had accepted his official invitation to the European Parliament.

The invitation was extended by President Schulz during his official visit to the Vatican in October 2013.

Pope Francis’ official visit to Strasbourg will take place on 25 November 2014 and the Pontiff will address the members during a formal session.

The President of COMECE, Cardinal Reinhard Marx welcomed news of the Pope Francis’ visit to the European Parliament

In a statement, the Cardinal said, “This is very good news, particularly as 2014 marks a series of challenging beginnings for the European project. Together with my fellow bishops of the EU, I am particularly gratified by this exciting announcement.”

Cardinal Marx also highlighted that the decision to come to Strasbourg before visiting any individual EU member state gives a strong signal that the Pope supports and encourages the pursuit of European integration and unity.

“Pope Francis is acknowledging the unique significance of the European institutions in the life of our Continent,” the Cardinal said.

The German prelate continued, “He is saluting the achievements of the European project, not least the peace dividend which merited the EU the Nobel Peace Prize.”

He also noted that European integration has enjoyed the benevolent support of the Catholic Church right from its inception.

Pope John Paul II visited the European Parliament in 1988; this second papal visit highlights that continuing support from the Church for the noble ideals of European integration.

“We hope that the Holy Father will encourage European parliamentarians in their work and that he will indicate how the foundational values of the Union – inspired to a large degree by the Christian faith – may shape the Europe of tomorrow,” Cardinal Reinhard Marx said.