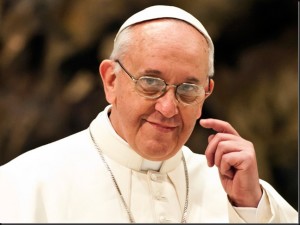 There were so many young people in St Peter’s Square in Rome for Sunday’s Angelus that Pope Francis likened it to being back in Rio de Janeiro for World Youth Day.

Departing from his pre-prepared script, the Pontiff offered his thanks to the people of Brazil for their exceptional welcome for WYD2013.

“I want to emphasise my deep gratitude to the Brazilian people, a people of great heart,” he said and added, “I won’t forget their warm welcome, their greeting, their affectionate gaze, so much joy! They are a generous people. I ask the Lord to bless them greatly.”

He recalled that last Sunday he was in Rio de Janeiro for the Mass to conclude World Youth Day.

“I think all of us together should thank the Lord for the great gift of this event, for Brazil, for Latin America, and for the whole world. It was a new stage in the pilgrimage of young people across the continents with the Cross of Christ.”

The Pope enjoined the crowd in Rome to pray with him “that the young people who participated in World Youth Day will be able to translate this experience into their daily journey, in their everyday conduct.”

He reminded his listeners that World Youth Days “are not ‘fireworks’ – moments of enthusiasm that end in themselves; rather they are stages of a long journey.”

The Pontiff underlined that the young people who participate in World Youth Day “are not following the Pope, they are following Jesus Christ, bearing His Cross. And the Pope guides them and accompanies them in this journey of faith and hope.”

Referring to Sunday’s reading from the Book of Ecclesiastes which warns against vanities, the Pope warned against the “poison of emptiness that insinuates itself into our society based on profit and having [things]”, saying consumerism deluded young people.

The alternative was an “encounter with the living Jesus, in the great family that is the Church,” and which “fills the heart with joy, because it fills it with true life, a profound goodness that does not pass away or decay.”

True wealth, Pope Francis said, “is the love of God, shared with others . . . he who experiences this love of God does not fear death; he receives peace of heart.”

After the Angelus, the Pope greeted the assembled pilgrims and visitors, especially the many young people in St Peter’s Square, some of whom had come part way to Rome on foot, while others had made the journey on bicycle.

Noting that Sunday was the feast of St John Vianney, the patron saint of priests, the Pope greeted pastors and priests all over the world, saying “let us be united in prayer and pastoral charity.”

He also noted that on Monday “we Romans” remember our Mother ‘Mary Salus Populi Romani’ – Mary the Protectress of the Roman People.

Pope Francis’ devotion to Mary Salus Populi Romani has been evident since the beginning of his pontificate and the Pope has visited the famous icon in the Basilica of Santa Maria Maggiore several times since his election last March.