Pope exhorts G20 to set aside military solution for Syria 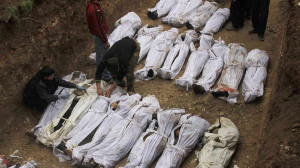 Pope Francis has appealed to the leaders of the twenty most powerful countries in the world meeting in St Petersburg for the G20 summit to “lay aside the futile pursuit of a military solution for Syria” and to look for ways “to overcome the conflicting positions”.

In a letter addressed to Vladimir Putin, President of the Russian Federation, and host of the G20 summit, which began yesterday, Pope Francis said that without peace there could be no form of economic development.

Pope Francis said that from the beginning of the conflict in Syria, “one-sided interests have prevailed and hindered the search for a solution that would have avoided the senseless massacre now unfolding”.

In his letter, the Pope pointed out that the world economy, which is seen as the main focus of the G20 meeting, would only develop if it “allows a dignified way of life for all human beings, from the eldest to the unborn child, not just for citizens of the G20 member states but for every inhabitant of the earth”.

He continued, “From this standpoint, it is clear that, for the world’s peoples, armed conflicts are always a deliberate negation of international harmony, and create profound divisions and deep wounds which require many years to heal.”

Unfortunately, he wrote, the many-armed conflicts which continue to afflict the world today present us daily with dramatic images of misery, hunger, illness and death. Without peace, there can be no form of economic development.

“The leaders of the G20 cannot remain indifferent to the dramatic situation of the beloved Syrian people which has lasted far too long, and even risks bringing greater suffering to a region bitterly tested by strife and needful of peace,” he added.

Pope Francis will host a day of fasting and prayer for peace this weekend. At the end of Wednesday’s general audience, his first general after the summer break, the Pope invited everyone to participate in a prayer vigil for peace, which he will lead in St Peter’s Square from 7pm to 11pm.

He asked the whole Church to live the day “intensely” and he expressed his gratitude to Christians, those of other religions, and all those of good will “who wish to join us, in the places and ways proper to them.”

Last Sunday Pope Francis made an impassioned plea for peace before reciting the Angelus.

“I appeal strongly for peace, an appeal which arises from the deep within me. How much suffering, how much devastation, how much pain has the use of arms carried in its wake in that martyred country, especially among civilians and the unarmed! I think of many children will not see the light of the future! With utmost firmness I condemn the use of chemical weapons: I tell you that those terrible images from recent days are burned into my mind and heart. There is a judgment of God and of history upon our actions which are inescapable! Never has the use of violence brought peace in its wake. War begets war, violence begets violence,” he told the assembled crowd.

All over Ireland, prayer vigils will take place in response to the Pope’s appeal. In Dublin, an evening of prayer for peace will be held in St Mary’s Pro-Cathedral with Mass followed by Exposition, Benediction and night prayers. Prayers will also be said at Masses in individual parishes throughout the Diocese that evening.

The G20 summit continues today. The G20 is made up of the leaders of the twenty most powerful economies, representing two-thirds of the world’s population and ninety per cent of global GDP.