Pope Emeritus will not publish again 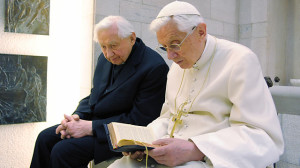 There will be no further publications from Pope Emeritus Benedict XVI his brother Mgr Georg Ratzinger has revealed.

In an interview with a German author, the Pope Emeritus’ brother, who is based in Bavaria, said Benedict XVI had nothing more to write.

The 89-year-old emphasised that the retired pontiff had “no acute illness” and that it was not due to any health reasons.

“His literary work is completed, there will be no further publications,” Mgr Ratzinger stated last week.

He also told his German interviewer, Michael Hesemann, who has just published a new book, ‘Pope Francis, the Legacy of Benedict XVI and the Future of the Church’ that the Pope Emeritus had experienced “great relief” when he resigned.

He dismissed speculation that disappointment over the Vatileaks scandal was the cause of his brother’s decision to resign and he also said it was untrue that Benedict XVI resigned over fears of a stroke.

Explaining the reason for the decision, he said the 86-year-old realised that he could no longer work a full schedule and because a 21st century Pope “cannot, as used to be possible, simply cut back” he considered it better to step down.

Mgr Ratzinger pinpointed Benedict XVI’s decision to his return from Mexico in late March 2012 when doctors discouraged him from travelling so far again.

With World Youth Day in Brazil and a visit to the Philippines on the cards, “he believed it was no longer right to remain in office.”

The demands on a Pope today are much greater than they were even 50 years ago, Mgr Ratzinger said. “He must be in full possession of his powers, and cannot, as used to be possible, to simply cut back.”

Speaking about Benedict XVI’s successor, Pope Francis, he said his brother was not very well acquainted with the Jesuit from Argentina prior to his election, “I think he did not know him well, probably only slightly” but now “appreciates him very much.”

On the question of whether Benedict XVI welcomes the changes being introduced by Pope Francis, Mgr Ratzinger said, “He never really talks about it, because he does not want there to be any possibility of him standing in the way of his successor or to cause him difficulties or problems of any sort.”