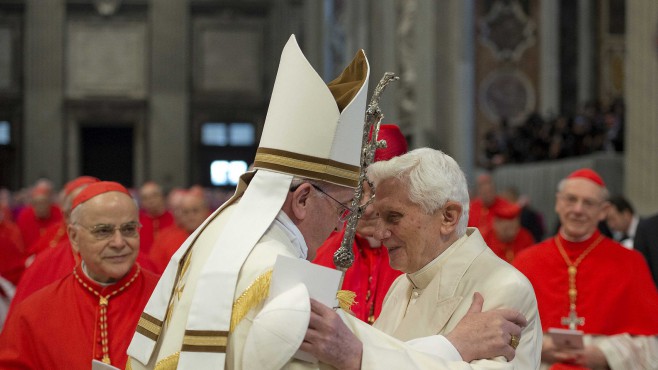 The streets around the Vatican were full of people sleeping out on Saturday night ahead of today’s unique double canonisation of two popes in a ceremony concelebrated by two popes.

On Saturday, the Holy See’s press office confirmed that Pope Emeritus, Benedict XVI, will concelebrate today’s Mass in which John XXIII and John Paul II will be canonised as saints.

However, this does not mean that he will be standing at the altar during the ceremony; rather he will be among the 150 cardinals and 750 bishops on the left side of the sanctuary.

The Taoiseach, Enda Kenny, will be among the official delegates from more than 90 countries attending the ceremony in St Peter’s Square.

Nineteen heads of state and 25 heads of government are among the more than 90 official state delegations in Rome for the canonisations.

The President of Poland, Ewa Kopacz, as well as two former presidents, Lech Walesa and Aleksander Kwasniewski, will be present with hundreds of thousands of Poles who have travelled to Rome.

He was the first Pope to enter a synagogue and a mosque.

Italian president, Giorgio Napolitano (88) will attend the ceremony. The Italian church is celebrating the recognition of their popular and reforming pope, John XXIII, who was supreme pontiff from 1958 to 1963.

At a press conference on Friday, the two cardinals who lived and worked for the future saints as their secretaries said they knew them to be saints because of their simple faith and goodness.

“Saints,” the 98-year-old prelate said, “are those who remain children”, maintaining always a youthful energy and enthusiasm as they follow the path God sets out for them. 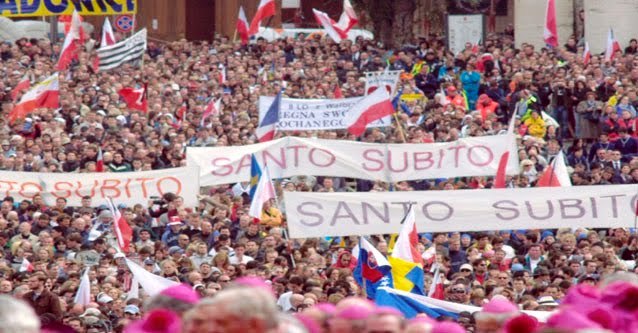 Cardinal Stanislaw Dziwisz, who served as Blessed John Paul’s secretary for 39 years, told reporters John Paul, “prayed with his life” and his holiness was also evident in his “holy suffering” throughout his life, never complaining and offering his suffering as a prayer for the world.

As he aged and weakened, the Polish cardinal said, Pope John Paul became more intent on preparing for a holy death because he always had believed that “death … would be a person’s greatest moment of encounter (with) the Lord.”

On Friday, the Vatican also issued the official prayer cards for the two saints.

On Saturday evening, the diocese of Rome held prayer vigils and offered confession to pilgrims ahead of the Mass in St Peter’s Square on Divine Mercy Sunday.

Following the Mass of Canonisation, St Peter’s Basilica will be open from 2 to 10pm to allow pilgrims the opportunity to visit the tombs of the new saints.

On Monday, a Mass of Thanksgiving for the Canonisations will be said in St Peter’s Square, beginning at 10am.