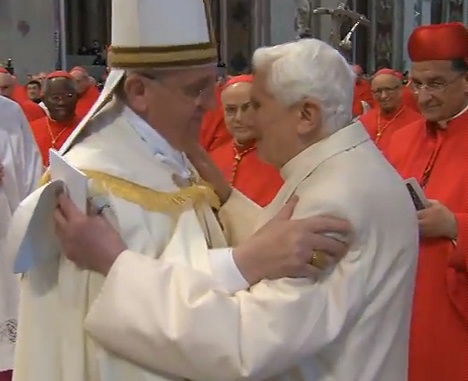 It was the first time the retired pontiff has attended a papal rite since his resignation in February 2013.

Sixteen of the nineteen new cardinals are cardinal electors and are thus eligible to elect a new pope in a conclave.

They will boost the number of cardinal electors from 106 to 122.

In his address, Pope Francis warned the new cardinals that “Whenever a worldly mentality predominates, the result is rivalry, jealousy, factions.”

Pointing out what the Church needs, he said, “She needs you, your cooperation, and even more your communion, with me and among yourselves.”

“The Church needs your courage, to proclaim the Gospel at all times, both in season and out of season, and to bear witness to the truth.”

“The Church needs your prayer for the progress of Christ’s flock, the prayer which, together with the proclamation of the Word, let us not forget, is the primary task of the Bishop.”

“The Church needs your compassion, especially at this time of pain and suffering for so many countries throughout the world.”

Pope Francis also expressed the Church’s “spiritual closeness to the ecclesial communities and to all Christians suffering from discrimination and persecution.”

“We must fight against every form of discrimination. The Church needs our prayer for them, that they may be firm in faith and capable of responding to evil with good. And this prayer of ours extends to every man and women suffering injustice on account of their religious convictions.”

Lastly, he said the Church needed the cardinals to be peacemakers “building peace by our words, our hopes and our prayers: let us therefore invoke peace and reconciliation for those peoples presently experiencing violence and war.”

86-year-old Pope Emeritus Benedict XVI entered St Peter’s through a side entrance, and walked to his seat using a walking stick. Dressed in a long white overcoat, he sat in the front row with the cardinals.

When he reached the front of the basilica to start the ceremony, Pope Francis greeted Benedict, who took off his white skull cap in a sign of respect and obedience.

Even though the crowd had been asked to refrain from applause during the ceremony, they clapped when Benedict walked in and again when his name was mentioned in an address by one of the new cardinals.

The new cardinal electors are aged 55 to 74. Archbishop Aurelio Poli, 66, is Pope Francis’s successor in Buenos Aires. Also from Latin America are the archbishops of Managua in Nicaragua, Rio de Janeiro in Brazil and Santiago in Chile.

Archbishop Chibly Langlois, 55, is the first cardinal from Haiti, the poorest country in the Western Hemispherei.

Only four of the cardinal electors are Vatican officials, among them Archbishop Pietro Parolin, 59, the Vaticna’s new secretary of state, and Archbishop Gerhard Mueller, 66, the head of the Congregation for the Doctrine of Faith.