Home > News > Pope denounces vanity and pride of the rich

Pope denounces vanity and pride of the rich 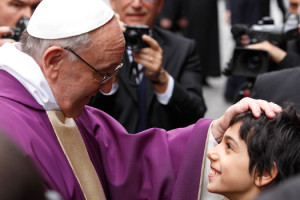 Pope Francis on Sunday decried the inequality of a ‘society of the few and for the few’ at a Mass in the Mexican city of Ecatepec where he also lashed out at drug violence.

The Mass, which was attended by over 500,000 pilgrims, also saw the Pontiff denounce the vanity and pride of the rich.

“That wealth which tastes of pain, bitterness and suffering. This is the bread that a corrupt family or society gives its own children,” the Pope said in his homily.

The Pope also raised the plight of migrants urging Mexicans to turn their country into a “land of opportunity” where “there will be no need to emigrate in order to dream” and where they will “not have to mourn men and women, young people and children who are destroyed at the hands of the merchants of death.”

In his homily at Mass on Sunday, the Pope spoke about the three temptations of Christ, which are also temptations for Christians: the temptation to wealth, to vanity, and to pride.

The penitential season of Lent, he said, is an invitation to conversion, to turn ourselves to Christ, who is waiting for us and wants to heal our hearts of all that tears us down.

“Wealth: seizing hold of goods destined for all, and using them only for ‘my own people’. That is, taking the ‘bread’ based on the toil of others, or even at the expense of their very lives. That wealth which tastes of pain, bitterness and suffering. This is the bread that a corrupt family or society gives its own children,” the Pope said.

“Vanity: the pursuit of prestige based on continuous, relentless exclusion of those who ‘are not like me’. The futile chasing of those five minutes of fame which do not forgive the ‘reputation’ of others.”

“’Making firewood from a felled tree’ gives way to the third temptation: pride: or rather, putting oneself on a higher level than one truly is on, feeling that one does not share the life of ‘mere mortals’, and yet being one who prays every day: ‘I thank you Lord that you have not made me like those others…’”.

The city of Ecatepec, has a population of over one and a half million and in recent years has become infamous for its rising crime and drug related violence.

It has also seen the death of up to 600 people over the period of 2014-2015, many of whose bodies were located in rubbish dumps or in a canal on the outskirts of the city.

Its economic and social failures mirror those of wider Mexican society where youth unemployment is rife and gang violence is at epidemic levels.

Just ahead of Pope Francis’ arrival in Mexico, 49 inmates died in a prison riot in the city of Monterrey in the north of the country while on Saturday 13 people were shot dead in the state of Sinaloa where drug cartels are rampant.

On Saturday, Pope Francis urged political, diplomatic and the country’s bishops to provide Mexicans with “true justice” and to combat drug violence with “prophetic courage”.