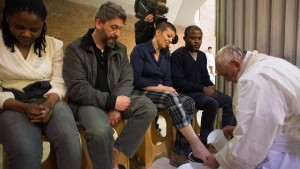 Pope Francis has decreed that from now on women as well as men will have their feet washed in the Holy Thursday liturgy.

The new ruling was issued by the Congregation for Divine Worship and the Discipline of the Sacraments along with a letter from Pope Francis to the prefect of the congregation, Cardinal Robert Sarah.

The rubrics set down by Pope Pius XII in 1955 had previously ruled that only men and boys should be selected from the congregation on Holy Thursday to have their feet washed by the celebrant.

However, at the Pope’s instruction, the Congregation for Divine Worship has ordered a change in the wording of the Missal.

In his letter the Pope explains that “from now on the Pastors of the Church may choose the participants in the rite from among all the members of the People of God.”

This group may consist of men and women, and ideally the young and the old, healthy and sick, clerics, consecrated persons and laypeople.

He suggests that pastors should explain the change to their people.

“After careful consideration, I have decided to make a change to the Roman Missal. I therefore decree that the section according to which those persons chosen for the washing of the feet must be men or boys, so that from now on the Pastors of the Church may choose the participants in the rite from among all the members of the People of God. I also recommend that an adequate explanation of the rite itself be provided to those who are chosen.”

The Pope said he had decided to make the change in order that the Holy Thursday liturgy “might express more fully the meaning of Jesus’ gesture in the Cenacle, His giving of Himself unto the end for the salvation of the world, His limitless charity.”

Pope Francis himself has washed the feet of women and girls during Holy Thursday ceremonies in his pontificate.

The washing of feet recalls the gesture that Jesus made at the Last Supper to his apostles.

Traditionalists argue that as the Holy Thursday liturgy commemorates the institution of the priesthood, the selection of men is only permitted in view of the male priesthood.