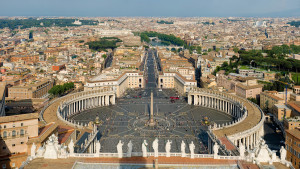 The nine offices which currently operate the Vatican’s media outlets are to be consolidated under a new Secretariat for Communications Pope Francis announced on Saturday.

In a motu proprio titled ‘The current communication context’, the Pope instituted the new secretariat which will take effect from Monday 29 June.

Mgr Dario Edoardo Viganò has been name as Prefect of the new Secretariat.

Fr Lucio Adrian Ruiz of the Vatican Internet Service has been appointed its secretary, while Paolo Nusiner, director of the Italian newspaper Avvenire, has been named director general and Giacomo Ghisani, head of Vatican Radio’s International Relations Office and Legal Affairs, is vice-director general.

The Secretariat for Communications will be temporarily headquartered in the premises of Vatican Radio.

The Motu Proprio establishes that all communications offices including the Pontifical Council for Social Communications, the Holy See Press Office, Vatican Internet Service, Vatican Radio, the Vatican Television Center (CTV), the Osservatore Romano, Vatican Typography, Photograph Service, and the Vatican Publishing House (Libreria Editrice Vaticana) will be incorporated under the direction of the new Secretariat for Communications.

The new dicastery will also work in union with the Secretariat of State for the direction of the Vatican’s website www.vatican.va and the Twitter account of Pope Francis @pontifex.

In his official announcement of the establishment of the Secretariat for Communications, Pope Francis said the current communication context, characterised by the presence and the development of digital media, by the factors of convergence and interactivity, requires a rethinking of the information system of the Holy See.

He said it also required a reorganisation which, recognising the history of internal development of the asset of communications of the Apostolic See, must proceed decisively towards integration and a unified management.

The Pope added that he wanted to see all of the organisations which, thus far have dealt with communications in different ways, brought together in a new Dicastery of the Roman Curia.

“Thus, the communication system of the Holy See will respond in an ever more efficacious manner to the needs of the mission of the Church,” the Pope wrote.