Pope celebrates his third World Day of the Poor 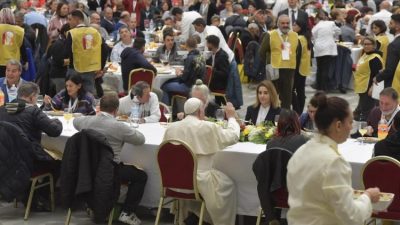 Yesterday across the world, the Universal Church celebrated ‘World Day of the Poor’ for the third time since it was established by Pope Francis in his Apostolic Letter, Misericordia et Misera.

As has been his custom, after celebrating a Mass in St Peter’s Square, Pope Francis shared his lunch with 1,500 of Rome’s poorest citizens in the Paul VI Hall.

In the run-up to yesterday’s events, Pope Francis had a temporary walk-in clinic set up in St Peter’s Square to give the poor access to medical care – last year more than 3,500 people were treated by doctors and nurses at the clinic.

In his message for this year’s World Day of the Poor, the Pope chose a quotation from the Book of Psalms for his theme: “The hope of the poor shall not perish forever”.

“These words of the Psalm remain timely,” said the Pope in his message. “They express a profound truth that faith impresses above all on the hearts of the poor, restoring lost hope in the face of injustice, sufferings and the uncertainties of life.

“I ask all Christian communities, and all those who feel impelled to offer hope and consolation to the poor, to help ensure that this World Day of the Poor will encourage more and more people to cooperate effectively so that no one will feel deprived of closeness and solidarity.”

In his homily, the Pope compared the financial inequalities of today with those described in the Old Testament. He said that today, people are trapped in new forms of slavery and it is an obligation on Catholics to not only provide the poor with relief services, but with spiritual hope.

Looking at how the extremely poor are often burdened by excessive debts, especially those who try to escape their plight by using the services of human traffickers, the Pope said: “As in a hunt, the poor are trapped, captured and enslaved. As a result, many of them become disheartened, hardened and anxious only to drop out of sight. They become for all effects invisible and their voice is no longer heard or heeded in society. Men and women who are increasingly strangers amid our houses and outcasts in our neighbourhoods.

“The poor acquire genuine hope, not from seeing us gratified by giving them a few moments of our time, but from recognising in our sacrifice an act of gratuitous love that seeks no reward. I encourage you to seek, in every poor person whom you encounter, his or her true needs, not to stop at their most obvious material needs, but to discover their inner goodness, paying heed to their background and their way of expressing themselves, and in this way to initiate a true fraternal dialogue.

“For once, let us set statistics aside: the poor are not statistics to cite when boasting of our works and projects. The poor are persons to be encountered; they are lonely, young and old, to be invited to our homes to share a meal; men, women and children who look for a friendly word. The poor save us because they enable us to encounter the face of Jesus Christ.”