Pope calls for solidarity with refugees on World Refugee Day 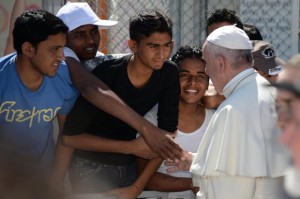 Pope Francis greets migrants and refugees at the Moria refugee camp near the port of Mytilene on the island of Lesbos, Greece, 16 April 2016.  EPA/FILIPPO MONTEFORTE / POOL

Pope Francis on Sunday appealed for solidarity with refugees ahead of the annual UN World Refugee Day which takes place today (20 June).

Referring to the theme for this year’s event, ‘We stand together #With Refugees’ and with all those forced to flee their lands, the Pope said refugees are people like everyone else, who have been deprived by war of their homes, their jobs, their parents and their friends.

“Their stories and their faces” he said, “call on us to renew our commitment for building peace through justice”.

For this reason, he concluded, we want to stand together with them, “to meet them, to welcome them, to listen to them, to become with them builders of peace, according to God’s will”.

The Pope’s words came after the recitation of the Angelus prayer, as he greeted thousands of pilgrims and visitors gathered in St Peter’s Square.

Last week, nine more Syrian refugees were brought to Rome from Greece with the help of the Vatican.

The nine arrived in Rome on Thursday from the Kara Tepe refugee camp on the Greek island of Lesbos, following the visit of Pope Francis to the island on 16 April, when he accompanied three families of refugees back to Rome.

The Vatican Gendarmeria, with the help of Interior Ministry of Greece, the Greek Asylum Service, and the Community of Sant’Egidio, accompanied the refugees from Athens to Rome on Thursday.

The Community of Sant’Egidio will provide for their housing, according to a statement from the Holy See Press Office.