Pope urges Muslims to take a stand on terrorism 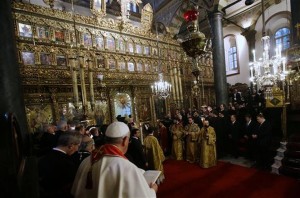 Pope Francis has called on Muslim leaders worldwide to more forcefully condemn terrorism carried out in the name of Islam urging them to declare “this is not Islam.”

Speaking at his customary in-flight press conference on the return leg following his three-day visit to Turkey, the Pope answered a question about Islamist jihadist groups such as ISIS by revealing what he had said to the Turkish President Recep Tayyip Erdogan in a private meeting on Friday.

Pope Francis said it was time for a “global condemnation” of terrorism by a cross-section of Islamic leaders.

“I told the president it would be beautiful if all Islamic leaders, [including] politicians, religious leaders, and academics, clearly spoke out” in this sense, the Pontiff said.

He said he believed “the majority of the Muslim population becomes angry” about terrorist acts committed in the name of Islam.

Hearing condemnation from their leaders “would help” he said.

Describing the Qu’ran as a “prophetic book of peace,” Pope Francis said “I firmly believe that one can’t say all Muslims are terrorists, just as all Christians aren’t fundamentalists, even though we have some.”

However, he also underlined that he did not want to play down the threat Christians in parts of the Middle East face from Islamic radicals, such as the treatment of Christians in the area around Mosul in Iraq who were forced by the Islamic State “to either pay a tax or leave everything behind.”

Pope Francis also criticised the arms trade which he said was “terrible” and he suggested that those who accused Syria last year over chemical weapons “may have been the same people who sold them.”

Earlier on Sunday, Pope Francis and the Ecumenical Patriarch Bartholomew I prayed together “That All May Be One” and in a joint declaration called for increased efforts to promote unity among the Christian churches.

On Sunday morning, at the conclusion of the Divine Liturgy, which commemorated the feast day of St Andrew the Apostle, in the Church of St George in Phanar in Istanbul, Pope Francis stated, “We are already on the way towards full communion.”

In his address, Patriarch Bartholomew said that although the Eucharistic communion does not allow “the convocation of a joint Great Ecumenical Council,” he prayed that it would not be prolonged.

“However, until that blessed day,” he said, “the participation in one another’s synodal life will be expressed through the involvement of observers, as we observe now, with Your gracious invitation to attend Synods of Your Church, just as we hope will also occur when, with God’s grace, our Holy and Great Council becomes reality.”

While acknowledging the process of reunification can be sometimes “rugged,” he said, it’s “nonetheless irreversible,” and is needed.

Both the Pope and the Patriarch agreed that for various reasons, the upheaval in the Middle East and persecution of Christians makes union all the more urgent.

“We no longer have the luxury of isolated action,” the Patriarch said. “The modern persecutors of Christians do not ask which Church their victims belong to.”

Given these events, “the path toward unity is more urgent than ever for those who invoke the name of the great Peacemaker.”

The Pope clarified that restoration of full communion “does not signify the submission of one to the other, or assimilation,” but rather means welcoming all the gifts that God has given to each.

“I want to assure each one of you here that, to reach the desired goal of full unity, the Catholic Church does not intend to impose any conditions except that of the shared profession of faith.”

In today’s world, voices are being raised which we cannot ignore and which implore our Churches to live deeply our identity as disciples of the Lord Jesus Christ, the Pope said, noting three in particular.

The first of these, he said, is the poor. “As Christians we are called together to eliminate that globalization of indifference which today seems to reign supreme, while building a new civilisation of love and solidarity.”

“Taking away the peace of a people, committing every act of violence – or consenting to such acts, especially when directed against the weakest and defenseless – is a profoundly grave sin against God.”

The Pope went on to say that it is the youth who wish for progress towards full communion, citing their willingness to come together with people of different beliefs. “They do this not because they ignore the differences which still separate us, but because they are able to see beyond them; they are able to embrace what is essential and what already unites us,” he said.

New generations, the Pope concluded, need the humanism that comes from the Gospel and the Church’s age-old experience.

Shortly after the Divine Liturgy, the Pope and Patriarch signed a joint declaration, their second one since May. It not only highlighted their mutual desire to continue this path toward communion between the Catholic and Orthodox Churches, but also stressed their concern over the Middle East.

“We express our sincere and firm resolution, in obedience to the will of our Lord Jesus Christ, to intensify our efforts to promote the full unity of all Christians, and above all between Catholics and Orthodox,” it stated. The declaration also called for Catholic and Orthodox faithful to “join us in praying ‘that all may be one.'”

Highlighting their common concern for the current situation in Iraq, Syria and the whole Middle East, the declaration noted, “We cannot resign ourselves to a Middle East without Christians, who have professed the name of Jesus there for two thousand years.”

While calling on the international community to respond to the “terrible situation” of Christians and all suffering in the Middle East, the declaration also highlighted the need for good relations with Muslims.

“Inspired by common values and strengthened by genuine fraternal sentiments, Muslims and Christians are called to work together for the sake of justice, peace and respect for the dignity and rights of every person, especially in those regions where they once lived for centuries in peaceful coexistence and now tragically suffer together the horrors of war,” it reaffirmed.

Following the signing of the Common Declaration, Pope Francis had a private lunch at the Ecumenical Patriarchate with Bartholomew I.

The Pope’s last day in Turkey started with a visit to the Chief Rabbi, Isak Haleva.

Pope Francis later met with 100 Syrian and Iraqi refugees before departing for Rome. The young refugees are looked after by the Oratory of the Salesian community, which cares for those escaping violent conflicts in the Middle East.

“Yours is the sad consequence of brutal conflicts and war, which are always evils and which never solve problems,” he told them. “Rather, they only create new ones.”

Addressing the lack of homes, health care, education and work for refugees, the Pope repeated his call to the international community to help in solving the conflicts that have caused their woes.

“The degrading conditions in which so many refugees are forced to live are intolerable!” he exclaimed. “For this reason, we must do everything possible to eradicate the causes of this situation.”

The Holy Father also recognized the efforts of Catholic organisations and relief agencies assisting those in need.

He further expressed his gratitude to the Turkish authorities “for the great efforts they have made in assisting the displaced, in particular Syrian and Iraqi refugees, and for the authorities’ tangible commitment in trying to meet their needs.”

Encouraging the young refugees, the Pope encouraged them to not lose hope despite the obstacles they are facing. “The Catholic Church is with you, including through the invaluable work of the Salesians,” he said.

“Remember always that God does not forget any of his children, and that those who are the smallest and who suffer the most are closest to the Father’s heart.”

Before heading to the airport, Pope Francis assured them that the Church would remain at their side and “hold up your cause before the world.”