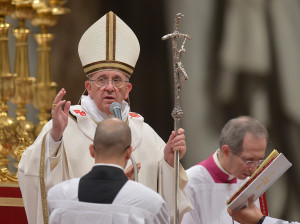 Up to 180 ambassadors accredited to the Holy See listened to the Pontiff on Monday as he delivered what is often termed his ‘State of the World’ address.

He told them it was of “paramount importance to support dialogue on the Korean peninsula” in a bid to overcome “current disputes”.

The Pope’s remarks follow the recent war of words between North Korean leader Kim Jong-un and the US President Donald Trump over their respective nuclear weapons capability.

In his New Year’s message, Kim Jong-un said that his nuclear arsenal is complete and the launch button is always within reach on his desk.

Responding, President Trump tweeted, “I too have a nuclear button, but it is a much bigger & more powerful one than his, and my button works!”

On nuclear disarmament, Pope Francis praised a new UN disarmament treaty, signed by 122 countries, that calls for the complete elimination of nuclear weapons.

However, the US, UK, France and others boycotted the talks which produced the treaty, instead pledging commitment to the Nuclear Non-Proliferation Treaty.

The Argentine Pontiff has taken a strong stance on the necessity of nuclear weapons disarmament, and has repeatedly denounced the continued possession of these weapons by some governments.

“Every effort in this direction, however modest, represents an important step for mankind,” he said on Monday.

Highlighting the Vatican ratification of the new UN disarmament treaty, Francis said it did so based on Pope John XXIII’s 1963 encyclical Pacem in Terris, which states that “justice, right reason, and the recognition of man’s dignity cry out insistently for a cessation to the arms race.”

Today, North and South Korea are due to hold talks in the demilitarised zone between the two states to address North Korea’s participation in the Pyeongchang Winter Olympics next month.

The talks are also expected to cover inter-Korean relations. This will be the first official meeting between the two neighbours since December 2015.

The Church in South Korea has been praying for the success of the talks between the two Koreas, Bishop Lazarus You Heung-sik of Daejeon told AsiaNews on Monday.

Bishop You, who is president of the Committee for Justice and Peace of the Catholic Bishops’ Conference of Korea, credited the progress between the North and South to the “patience and perseverance” of South Korean President Moon Jae-in ‎who, he said, “never stopped holding the door open to meeting with the North, even in the most tense moments ‎of the last months.”

Bishop You explained that the turning point came with Moon’s invitation to involve North Korean athletes in the Winter Olympics and with Kim accepting the offer.

Kim Jong-un, in his New Year’s Day speech, expressed a desire to reduce tensions between the two states and suggested the possible participation of the North in the Winter Olympics.

Noting a “softer” tone, the Bishop said the North Korean leader had reiterated the desire for unity among the people of the Korean peninsula.

Stressing that sports and culture can unite people, Bishop You said he hoped that many fans along with North Korean athletes would participate in the Pyeongchang Winter Olympics. “Above all, coming together undermines prejudices and confirms that with we cannot reach peace with weapons,” he said.

Following the 1953 partition of the Korean Peninsula, many families found themselves divided between the South and the North, unable to see each other.

At present, some 60,000 aging Koreans still hope to meet their relatives before dying. The last family reunion was held in 2015.