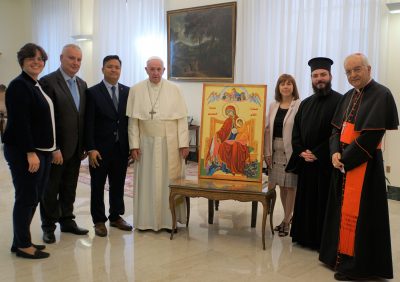 Our Lady of Sorrows Consoler of Syrians

Pope Francis has blessed an icon for the people of Syria, as well as thousands of rosaries which are to be distributed to families in the war-torn country.

On Sunday (15 September 2019) Pope Francis blessed the icon of Our Lady of Sorrows, Consoler of the Syrian People, at a private ceremony in the Vatican attended by a delegation from Aid to the Church in Need (ACN), which is behind the initiative.

The charity teamed up with Greek Orthodox priest Father Spiradon Kabbash, who created the icon as a message of hope.

“We will send it to many places in the world because they need consolation from God. The war is too heavy for the people,” he said.

Speaking after the papal blessing ceremony, Cardinal Mauro Piacenza, President of Aid to the Church in Need (International), said that the feast of Our Lady of Sorrows gives a lesson in true maternal compassion.

The icon will be sent to each of Syria’s 34 dioceses, starting in Damascus, the capital, where it will be presented by the Apostolic Nuncio to Syria, Cardinal Mario Zenari.

The blessing ceremony took place the same weekend as Christians in towns and cities across Syria received 6,000 rosaries blessed by the Pope a month ago on 15 August 2019, which was the Feast of the Assumption of the Blessed Virgin Mary.

ACN has given priority to emergency and pastoral support for Syria, completing more than 850 projects since the war began in 2011.

The rosary and icon initiatives came in response to reports that 2000 Christian families have lost at least one member each during the war. Around another 800 families have had at least 1 member abducted during the 8-year crisis.

ACN is a Pontifical Foundation and supports people through information, prayer and action, wherever they are persecuted, oppressed or in need.

This includes providing transport for clergy and lay church workers, children’s Bibles, and media and evangelisation projects. It also builds churches and gives Mass stipends and other support for priests and nuns as well as training for seminarians.

Tags: Consoler of the Syrian People, Feast of the Assumption of the Blessed Virgin Mary, Greek Orthodox, Icon, Our Lady of Sorrows, Syria