Home > Featured > Pope Benedict XVI is on a “pilgrimage towards home”

Pope Benedict XVI is on a “pilgrimage towards home”

A hand delivered letter to the Italian daily newspaper, Corriere della Sera, brought first hand news of how Pope Benedict XVI is living out, what are perhaps his final days.

The Pope emeritus wrote to the senior correspondent of the paper, Massimo Franco, in reply to a letter from Mr Franco asking the Pope, on behalf of the paper’s readers, how he was, in the lead up to the fifth anniversary of the announcement of his resignation in 2011.

In his reply, which was published in full on the front page of the Italian newspaper on Wednesday 7th February, Pope Benedict XVI said that “with the slow decline of my physical forces, interiorly, I am on a pilgrimage towards Home”.

The pope said he was “moved” that readers of the Corriera wanted to know how he was “spending this last period” of his life and that he felt “surrounded in this last, sometimes a little tiring, piece of road, by such love and goodness that I could not have imagined”.

According to Corriera della Sera, the letter, reproduced in full below, arrived at the offices of the newspaper with the words “urgent by hand”:

I was moved that so many readers of your newspaper would like to know how I am spending this last period of my life. I can only say that with the slow decline of my physical forces, interiorly, I am on a pilgrimage towards Home. It is a great grace for me to be surrounded in this last, sometimes a little tiring, piece of road, by such love and goodness that I could not have imagined. In this sense, I also consider the question of your readers as an accompaniment along a stretch. This is why I cannot but be grateful, assuring all of you of my prayers. Best regards.”

Pope Benedict XVI will be 91 in April.  He served as Pope from  2005 until his resignation in 2013. His election occurred in the 2005 papal conclave that followed the death of Saint Pope John Paul II.

Pope Benedict announced his resignation in a speech in Latin before the cardinals on 11 February 2013, citing a “lack of strength of mind and body” due to his advanced age, so becoming the first pope to resign since Pope Gregory XII in 1415.  Since then, the Pope emeritus has been living in a former monastery in the Vatican gardens, the Mater Ecclesiae, staying out of the public eye apart from private meetings with friends and relations. 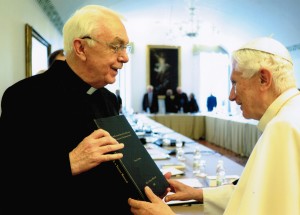 In June 2016 he made one of his rare public appearances at an event celebrating  65 years of  his priesthood where both he and Pope Francis were together. His former student, Dr Vincent Twomey SVD was there too. “He was in great form,” he recalls. “I spoke to him and he was very alert. I remember he stood up and replied with a beautifully constructed thank you to two speeches, by Pope and a cardinal.”

The Professor Emeritus of Moral Theology told CatholicIreland that Pope Benedict XVI’s former students meet every year around August or September. At their last meeting in 2017, the students who had not seen the Pope the previous year, visited Pope Benedict in the ‘monasterio’ and reported back to the others (including Fr Twomey) that the pope “was in great form. He’s very conscious of course that he’s on his way to heaven, as he puts it, he’s very serene and alert to what is happening”.

Those who have been to visit him recently say “he is still mentally sharp but has difficulty moving and needs a walker to get around,” according to the National Catholic Register.