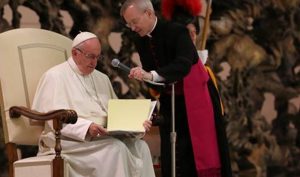 At a meeting with female religious at the Vatican on Thursday, Pope Francis suggested it would be good to set up a commission to study reinstating female deacons.

The pope was at a closed door conference with 900 leaders of female religious orders and congregations, members of the Union of Superiors General, celebrating its fiftieth anniversary this year.

During the hour and a half long session in the Paul VI hall, the Pope answered questions about the mission and ministry of women in religious life, including a question about what prevents the Church from including women among the Church’s permanent deacons, like in the early Church.

In his reply, the Pope said understanding the role of female deacons in the early Church “remained unclear” and agreed with the Sisters that it would be useful to set up a Commission to study the question.

Commenting on the Pope’s reply, Fr Vincent Twomey SVD said that the International Theological Commission presided over by Cardinal Joseph Ratzinger, had examined the question is some detail.

“In 2002, the results of their deliberations spanning almost ten years were published. It is a substantial document of impressive scholarship,” Fr Twomey told CatholicIreland.net.

The commission dealt with this precise topic within the larger context of the development of the office of deacon from the early Church down to our time, he said.

“In effect, the Commission found that what were called “diaconesses” in the early Church were the equivalent of Religious Sisters.”

The Professor Emeritus of Moral Theology said that in the East, (Syria and Byzantium), there were diaconesses who, for obvious reasons, assisted the Bishop at the adult baptism of women, when it was still the practice to anoint the whole body of baptized  with sacred oil.

But otherwise they had practically no other liturgical function. “Their main ministry (=diakonia in Greek) was to care for the needy, not unlike Religious Sisters in active Congregations.”

But he added that a second commission studying the female diaconate, set up by Pope Francis might be of value “since there is now a greater likelihood that Catholics might read the document produced by his commission.”

He did not think however that the findings would change.

However, in an interview with the Catholic Times in 2015, Dr Phyllis Zagano of the Department of Religion at Hofstra University appeared to shed a different light on Dr Twomey’s interpretation of how the ITC came to its decision on women deacons in 2002.

Dr Zagano highlighted that the commission’s findings in 2002 followed the then Cardinal Ratzinger’s rejection of the original findings of the committee’s study on women deacons.

Cardinal Gerhard Müller, Prefect of the Congregation for the Doctrine of Faith, was one of those spearheading the opposition to women deacons on the International Theological Commission (ITC) which presented its study to Cardinal Ratzinger in 2002.

Reportedly, the original research on women deacons was passed by the entire ITC in 1997 which said it was possible to ordain women as deacons but Cardinal Ratzinger refused to sign off on the study.

He sent it back to the committee and it resurfaced again in 2002 substantially changed.

According to Phyllis Zagano, “All of a sudden the history of women deacons from the 4th to the 12th century fell on the floor”.

What emerged in the reworked study of 2002 was an argument suggesting that the women deacons of history weren’t the same as male deacons and emphasising the differences between the diaconate and the priesthood.

It said that it was up to the ministry of discernment that Christ left for his Church to decide on the matter.

In fact, 18 sections of the original Müller book appear to have been dropped into the 2002 Vatican document, with no credits or citation as to where they came from.

Question have been raised by some researchers as to whether this is plagiarism due to the lack of citations and whether the findings of the 2002 document on women deacons can be said to be the work of the committee or those of one prominent member?

According to Zagano, an earlier study on women deacons requested by Pope Paul VI which supported the reintroduction of the ministry was suppressed and remains unpublished.

An article by commission member Cipriano Vagaggini published in Orientalia Christiana Periodica in 1974 concluded that the ordination of women deacons in the early church was sacramental. What the Church had done in the past, he suggested, the Church could do again.

A new book on this issue of women deacons, edited by Zagano who has also overseen its translation, is due to be published this year.

It will bring together 16 essays in French and Italian and four in English written by very senior theologians, including members of the International Theological Commission, such as Vagaggini, Marucci, Sorci, Delhaye, Zanetti and Congar, who wrote papers between 1972 and 1994 supporting the ordination of women as deacons and which have been ignored by the Vatican.

In her interview with the Catholic Times last year, Phyllis Zagano explains that the issue of women deacons has been “a theological kick the can down the road” on the part of the Vatican.

“Scholars have been aware of some of these studies published in the book. I am told that the Vatican knows it is ‘merely ecclesiastical law’ that you can’t ordain a woman as a deacon.”

She has also been told many times by people working in the Vatican that “they can’t say no to women deacons, they just don’t want to say yes”. Part of the problem is that the discussion always moves over to priesthood and gets derailed.

The nub of the matter is whether those women deacons in the early Church received true sacramental ordination, or whether they were merely so-called deacons for functional or honorific purposes. Is the current prohibition on the ordination of women to the diaconate based on divine law or a church law?

“Some people say there are theological reasons and that women can’t receive Holy Orders – and I say well they did!” She cites St Paul in Roman 16:1 who calls Phoebe “deacon of the church at Cenchreae”. She underlines that he used “deacon with a feminine ending in Greek, not deaconess”.

In Timothy 3:11, most scholars agree that St Paul refers to other women deacons.

Listing the various qualifications for deacons, he states, “Women, similarly, should be dignified, not slanderers, but temperate and faithful in everything.” It was in the third and fourth centuries that the language changed and women deacons began to be called deaconesses.

Summing up the importance of her forthcoming book, Dr Phyllis Zagano told the Catholic Times last year that what the book shows is that there is historical precedent for very senior theologians, including members of the International Theological Commission, to support the ordination of women as deacons.

They wrote papers which have been ignored. “The fact of the matter is that women deacons were ordained in identical ceremonies. The question of restoring women to the diaconate is up to the ministry of the Church and we are supposed to talk about it – and that is what we are doing.”

During his meeting with the women religious, Pope Francis repeated that he wanted to see an increase in the number of women in decision-making positions in the Church, saying women’s perspectives were important for both the “elaboration and the carrying out of such decisions”.

Asked if women could preach homilies during Mass, Pope Francis said it was important to distinguish between other types of liturgies, where the sermon could be preached by women – consecrated or lay, and the Mass, where the homily was connected to the role of the priest serving “in persona Christi”. 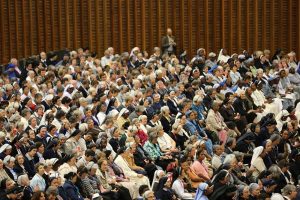 Sisters at the UISG meeting at Paul VI hall, Rome.

Referring to the Pope’s comments on Friday, his press secretary stressed that Pope Francis did not say that he intended to introduce the ordination of women.

“The Pope did not say he intends to introduce the ordination of female deacons and even less did he talk about the ordination of women as priests. In actual fact, the Pope made clear in his preaching during the course of the Eucharistic celebration that he was not considering this (question) at all,” said Fr Federico Lombardi.

The International Union of Superiors General is an international forum where general superiors of Catholic women’s religious institutes can share experiences, exchange information and accompany each other in carrying out their service.

It is formed by 1,858 General Superiors, present in more than 100 countries and representing more than 470,000 women.

Among those present at the meeting is Sr Mary Deane, Congregational Leader of the  Presentation Sisters Union.