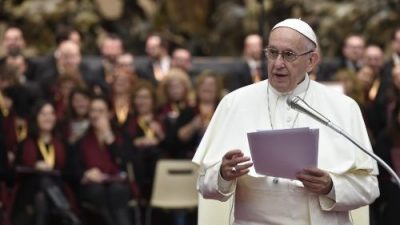 Pope Francis has again lent his voice to the efforts of UN Secretary General, Antonio Guterres, in calling for a global ceasefire to enable countries better address the Covid-19 pandemic.

In his Angelus address on Sunday, the Pontiff referred to the UN Security Council’s recent Resolution calling for a global ceasefire to allow humanitarian relief in combat zones where the virus is spreading.

The Pope said he hoped that the call for a global and immediate ceasefire, which would allow that peace and security necessary to provide the needed humanitarian assistance, would be “implemented effectively and promptly for the good of the many people who are suffering”.

He added, “May this Security Council Resolution become a courageous first step towards a peaceful future.”

The UN Security Council adopted the resolution last Thursday demanding a general and immediate cessation of hostilities in all situations in order to provide aid to countries to help fight the Covid-19 pandemic.

The ceasefire was first proposed by the UN Secretary General Antonio Guterres on 23 March.

It was quickly backed by Pope Francis, who on 29 March appealed to world leaders to “follow it up by ceasing all forms of hostilities, encouraging the creation of corridors for humanitarian aid, openness to diplomacy, and attention to those who find themselves in situations of vulnerability.”

“May our joint fight against the pandemic bring everyone to recognize the great need to reinforce brotherly and sisterly bonds as members of one human family”, the Pope said in March.

From the Library of the Apostolic Palace he added, “In particular, may it inspire a renewed commitment to overcome rivalries among leaders of nations and those parties involved. Conflicts are not resolved through war.”

Antagonism and differences, Pope Francis underlined, “must be overcome through dialogue and a constructive search for peace.”

In an interview with Vatican News on 26 May, UN Secretary General, Antonio Guterres, thanked Pope Francis for supporting his appeal for a global ceasefire and for the work of the United Nations.

The statesman said of the Pontiff, “His global engagement, compassion and calls for unity reaffirm the core values that guide our work: to reduce human suffering and promote human dignity.”

Guterres explained that when he launched the ceasefire appeal, his message to parties to conflict around the world was simple: “fighting needs to stop so that we can focus on our shared enemy – Covid-19”.

So far, the call has been endorsed by over 100 governments, regional organisations, more than 200 civil society groups as well as other religious leaders.

Sixteen armed groups have pledged to end violence. Millions of people have also signed an online call for support.

“But mistrust remains high, and it is difficult to turn these commitments into actions that make a difference in the lives of those impacted by conflict,” warned Guterres.