Irish Church urged to pray for peace in Holy Land 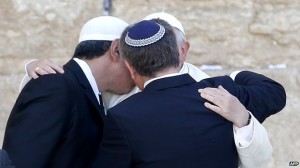 The Primate of All Ireland, Cardinal Seán Brady, has appealed to the Irish faithful on behalf of Pope Francis to pray for peace in the Holy Land this weekend.

The request was made to apostolic nuncios around the world asking them to invite their local Church to pray in solidarity with the Pope as he leads a special peace invocation in the Vatican today.

In a statement, Cardinal Brady explained that “When Pope Francis was on pilgrimage in the Holy Land last month, he invited President Shimon Peres of Israel and President Mahmoud Abbas of Palestine to come to his home so that, with him and together, they might beseech God for the gift of peace.”

The two Middle Eastern leaders will take part in what is being termed as an “unprecedented prayer initiative” at the Vatican today, the feast of Pentecost.

The prayer gathering will also involve His Holiness Bartholomew, Patriarch of Constantinople.

“I encourage the faithful of Ireland, and all people of goodwill, to support this request from Pope Francis, trusting that the Lord’s promise may be fulfilled: ‘I say to you, if two or three of you agree on earth about anything they ask, it will be done for them by my Father in heaven’ (Mt 18:19),” the Cardinal said in his statement.

Hopes for a fresh impetus for the stalled Middle East peace talks have been raised by today’s meeting of Presidents Mahmoud Abbas and Shimon Peres with Pope Francis and Patriarch Bartholomew.

The Palestinian delegation will include both Christians and Muslims and there will also be Christians in the Israeli delegation.

According to Vatican spokesman, Fr Federico Lombardi, the Jewish, Christian and Muslim leaders will pray together in the Vatican Gardens, led in prayer by a rabbi, a priest and an imam.

Afterwards Francis and Presidents Abbas and Peres will each say a few words about the occasion before retiring for a private meeting with Patriarch Bartholomew.

During a briefing on Friday, Fr Pierbattista Pizzaballa OFM, custodian of the Holy Land, and Fr Lombardi, revealed the following details about the ‘Invocation for Peace’ initiative.

Presidents Peres and Abbas will arrive at the Vatican within a few minutes of each other.

The Holy Father will receive them at the entrance of Casa Santa Marta, and will briefly meet them individually.

All three will then join with the Ecumenical Patriarch Bartholomew, and proceed by car to the Vatican Gardens where the event will take place, beginning with a musical introduction and an explanation in English of the structure and form of the celebration, which will follow the chronological order of the three religions: Judaism, Christianity, and Islam.

The Christian part will follow the same structure, but the first prayer will be in English, the second in Italian, and the third in Arabic.

Finally the Muslim part of the celebration will proceed as above, in Arabic.

The reader will then introduce in English the final part of the celebration, beginning with Pope Francis’ discourse invoking peace.

The Holy Father will then invite each of the two presidents to formulate his own invocation.

As a gesture of peace, in which the Patriarch Bartholomew will also participate, they will all shake hands and the Pope will then accompany them in planting an olive tree, symbol of peace.

At the end of the celebration the four will remain side by side while the delegations pass by to greet them.

The Holy Father, the two presidents and the Patriarch will then proceed to the Casina Pio IV to speak in private.

Finally, Shimon Peres and Mahmoud Abbas will leave the Vatican, while Pope Francis and the Patriarch Bartholomew will return to the Domus Sanctae Marthae.