Pope Francis has approved the beatification of Irish Jesuit, Venerable John Sullivan, who in his own lifetime was renowned for his devotion to the sick and poor.

The decree authenticating a miracle attributed to the intercession of Fr Sullivan was approved at an audience between the Pontiff and Cardinal Angelo Amato, prefect of the Congregation for the Causes of Saints.

On Wednesday, Archbishops Eamon and Diarmuid Martin, along with Archbishop Michael Jackson of the Church of Ireland expressed a warm welcome for the news.

In a statement, Archbishop Eamon Martin described the news as “wonderful”.

“I know that the news will be welcomed by all those, in Ireland and around the world, who have a devotion to him and who have been inspired by his ministry,” he said.

The Archbishop of Armagh said Fr Sullivan had great time for and devotion to the sick.

“He was a man who had a great gift of consolation and healing to those who were sick.” He added that Fr Sullivan had that readiness to serve those who were in need.

Many miracles have been attributed to the Jesuit priest who was born in Dublin and baptised into the Church of Ireland (his father’s tradition) and who became a Roman Catholic (his mother’s tradition) in the second half of his life.

Born in 1861, he was educated at Portora Royal College in Enniskillen and Trinity College Dublin. When he was 35 he was received into the Catholic Church and he entered the Jesuit Order in 1900 and was ordained in 1907.

Much of his priestly life was spent in Clongowes Wood College in Co Kildare, where he had a reputation for sanctity among the schoolboys and the many local often poor people whom he visited. 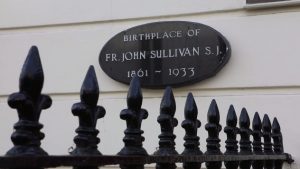 Word of his holy and healing ways spread around Ireland and to this day thousands visit his tomb in Gardiner Street Church in Dublin with deep devotion, praying for his help and intercession for healing.

Archbishop Martin said in a statement on Wednesday that Fr John Sullivan was marked in a special way by a great care for the sick.

“Reading his biographies is like reading a directory of the hospitals and the homes for the sick in the Dublin of his days. There was nothing that would hold him back from visiting someone who was sick and who had asked for his prayers.”

He recalled that in his years in Clongowes College, the Jesuit would travel by bicycle or on foot when he heard the news of someone who was ill.

“He was not a medical expert or a faith healer, but a man who through his own prayer and personal holiness was able to transmit to those he encountered something of the healing power and the Good News of Jesus Christ.”

Archbishop Martin said John Sullivan’s seeking for God led him towards the Catholic Church and then towards priestly ordination, but he never renounced the initial formation he had received in the tradition of the Church of Ireland “John Sullivan’s faith was the product of two traditions and always remained so and was enriched by that fact”.

Fr Conor Harper SJ, Vice Postulator for the cause of Fr John Sullivan, said on Wednesday that the long awaited news would delight many of the friends of John Sullivan throughout the world but especially here in Ireland.

“What is remarkable about Fr John Sullivan”, he added, “has been the manner in which he is remembered and revered in the two Christian traditions that were so dear to him, the Roman Catholic and the Protestant. Our Church of Ireland friends join us in celebration.”

Also commenting on the news, the Church of Ireland Archbishop of Dublin, Dr Michael Jackson said, “The holiness of the life of John Sullivan SJ has touched and inspired countless people in Ireland and internationally.”

“We in the Church of Ireland give thanks for the public recognition of holiness, humility and service of humanity on the part of John Sullivan. We rejoice in the fact that, as well as living a life that honoured God and the Jesuit Order, he spent half of his life as a member of the Church of Ireland.”

He added that the recognition of his holiness “has a strong ecumenical feel to it as he never rejected the influence of the Anglican tradition on his spiritual flourishing. Members of Portora Royal School, where John Sullivan was educated will also rejoice on this day.”

More information on the life and works of John Sullivan is available at www.frjohnsullivan.ie/ and at www.gardinerstreetparish.ie which holds the John Sullivan Cross. Fr John Looby SJ is currently writing a new biography of Venerable John Sullivan which is due to be published by Messenger Publications in 2016.