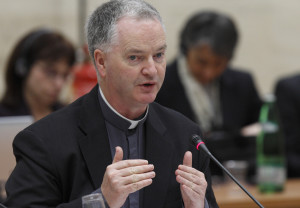 Pope Francis has appointed an Irish priest to a new high profile committee tasked with reforming the Vatican’s media.

Mgr Paul Tighe, who currently acts as Secretary of the Pontifical Council for Social Communication, has been appointed Secretary to the new Committee for Vatican media, headed up by experts from the Vatican and around the world.

It is envisaged that the new committee will strengthen digital channels in the Church to ensure Pope Francis’ messages reach more people globally, especially young people via initiatives such as the Pope App and the Pope’s Twitter account.

At a press conference on Wednesday, Cardinal George Pell, prefect of the Secretariat for the Economy, announced that Lord Christopher Patten, the former BBC Trust Chairperson, would chair the expert committee.

The Vatican’s public communications are currently divided among several different offices: the Vatican press office; the newspaper, L’Osservatore Romano; Vatican Radio and the Vatican Television Centre; the Vatican website; the Vatican Information Service; the publishing house; and the Pontifical Council for Social Communications.

The new committee will be charged with arranging a more co-ordinated approach across all of them. It will propose reforms for existing Vatican media and is expected to publish a report and a reform plan within the next 12 months.

The Vatican also promised that under the new system that will emerge from the process of reform, “digital channels will be strengthened.”

The members of the committee come from Vatican staff and from senior international experts.

They have been chosen for their expertise in communications while reflecting the universality of the Catholic Church.

Congratulating Mgr Tighe, Archbishop Diarmuid Martin of Dublin said his innovation in media relations was making a significant impact in the Universal Church.

A graduate of University College Dublin, in 1979 Fr Tighe was awarded a degree in Civil Law. Having studied for the priesthood at Holy Cross College, Dublin and at the Pontifical Irish College in Rome, he was ordained a priest of the Dublin Diocese in 1983.

His first appointment was as parish chaplain and teacher in Ballyfermot. Subsequently, he was assigned to study Moral Theology at the Pontifical Gregorian University in Rome.

In 1990, he was appointed as a Lecturer in Moral Theology at the Mater Dei Institute of Education in Dublin and at Holy Cross College.

In 2004, he was named as Director of the Communications Office of Dublin Diocese. In 2005, he established the Office for Public Affairs which aimed to promote the engagement of the Diocese with public institutions and civic society.

In November 2007, he was appointed as Secretary of the Pontifical Council for Social Communications.