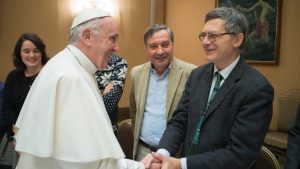 Pope Francis appointed the first lay person to ever head up a Vatican department on Thursday.

Italian journalist Paolo Ruffini has been appointed Prefect of the Dicastery for Communications.

The 62-year-old Sicilian has been a professional journalist since 1979 and has received numerous awards and taken part in conferences on the role of communications ethics, the new media, and the role of Christians in media.

Born in Palermo in 1959, Paolo Ruffini obtained a degree in law at Rome’s La Sapienza University.

He succeeds Mgr Dario Eduardo Vigano, who resigned following a row over the release of parts of a photo edited private letter written by Pope Emeritus Benedict XVI about Pope Francis’ theology.

According to The Tablet, in a recent interview with Reuters, Pope Francis said he had initially wanted to appoint a woman to lead the communications body when it was established in 2015, and has no problem in appointing non-ordained men or women to departments in the Vatican that don’t have “jurisdiction” in terms of the sacramental-ministry reserved to priests.

Paolo Ruffini is the son of the late Attilio Ruffini, a former Italian Minister of Foreign Affairs and a member of the Christian Democratic party.

He is a nephew of the late Cardinal Ernesto Ruffini (1888-1967), a former Archbishop of Palermo appointed by Pope Pius XII.

He is also related to the right-wing Italian politician, Enrico la Loggia, who served as Minister for Regional Affairs in two Berlusconi administrations and is currently an Italian senator.

According to America magazine, as head of the Dicastery for Communication, the largest Vatican department in terms of personnel, Paolo Ruffini will oversee a staff of more than 600 people from 40 countries.

“The dicastery, which was until recently called a secretariat, has been radically reconstituted by Pope Francis in a series of reforms that began in 2015 and will be concluded by the end of this year with the incorporation of the Vatican daily newspaper L’Osservatore Romano and the Vatican printing press into the dicastery,” according to America.

From January 2019, all the Vatican’s media operations will be under one structure, including a news hub, television, radio, daily newspaper, printing press, publishing house, photographic service and the Holy See Press Office.