71-year-old President of the Pontifical Council for Interreligious Dialogue takes over from Cardinal Bertone. 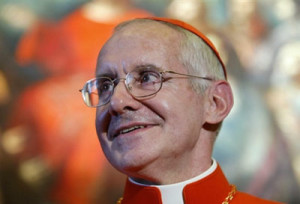 Pope Francis has named a new camerlengo or chamberlain, the prelate who runs the Vatican following the death or resignation of a pontiff.

Cardinal Tauran is currently President of the Pontifical Council for Interreligious Dialogue.

Cardinal Bertone, who was formerly the Vatican Secretary of State, held the position of camerlengo from 2007.

As a senior cardinal deacon, Cardinal Tauran was catapulted into the limelight on 13 March 2013 when he came out on the balcony of St Peter’s to announce “Habemus Papam” and that it was Cardinal Jorge Bergoglio.

The Bordeaux native was conscientious objector, refusing to serve in the army and, before entering the seminary, he did civil service as voluntary aid worker and taught in a Catholic school in Lebanon.

Ordained in 1969, Fr Tauran worked as a curate in the Archdiocese of Bordeaux while he studied canon law at the Catholic University of Toulouse.

He took office in the Vatican’s diplomatic service in 1975.

He was secretary of the nunciature to the Dominican Republic from 1975 to 1979, and was later transferred to the Lebanon, where he remained till 1983, when he was called to join the Council for the Public Affairs of the Church.

From 1990 to 2003 he was Secretary for Relations with States. During these 13 years, Cardinal Tauran went on several missions abroad and led the Vatican delegation in numerous international conferences.

He was created Cardinal-Deacon by Pope John Paul in the consistory of 21 October 2003 and was also named Archivist and Librarian of the Holy Roman Church.

Pope Emeritus Benedict XVI later appointed him president of the of the Pontifical Council for Interreligious Dialogue in June 2007.

Affected with Parkinson’s disease, he is widely admired for the heroic attitude with which he continues his apostolic activities despite his obvious difficulties, just like John Paul II.

The Camerlengo is the administrator of the property and revenues of the Holy See during the Sede Vacante or during the absence of the Pope, but he must do so in a way as to preserve the property, without taking extraordinary initiatives.

If the Pope dies, he has the task of certifying the death and informing the Cardinal Vicar of Rome, who is entrusted with the task of revealing the news to the people.

The Camerlengo takes possession of the Ring of the Fisherman and cuts it and all other papal seals with shears.

He then seals off the papal apartments in the Apostolic Palace in the Vatican, in the Lateran Palace and in Castelgandolfo. This marks the beginning of the Sede Vacante, when the Camerlengo starts preparing the funeral and the subsequent nine days of mourning, or ‘novendialis’. He then starts preparing the Conclave to elect a new Pope through the General Congregations.