Killing in name of religion a grave sacrilege: Pope 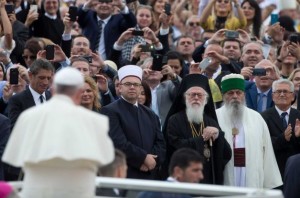 Pope Francis has rebuked those who kill in the name of God warning them that they commit a grave sacrilege.

In his address at a meeting with leaders of other religions and Christian denominations in Albania on Sunday afternoon, the Pope described discrimination in the name of God as “inhuman.”

Speaking at the Catholic University of Tirana, the Pope said “Authentic religion is a source of peace and not of violence.”

Noting that religious freedom cannot be guaranteed by legislation alone, the Pope urged his listeners to promote attitudes of respect and cooperation in the service of the common good.

When a person is secure of his or her own beliefs, he said, there is no need to impose or put pressure on others.

Earlier on Sunday, addressing the President, Government, civil authorities and the diplomatic corps of Albania, on his one-day apostolic visit, Pope Francis said, “May no one use religion as a pretext for actions against human dignity and against the fundamental rights of every man and woman, above all, the right to life and the right of everyone to religious freedom!”

In his address at the start of the day at the Presidential Palace in Tirana he spoke with joy and appreciation of the climate of respect and mutual trust that exists in the Albanian nation between Catholics, Orthodox and Muslims and said that peaceful coexistence and collaboration among followers of different religions is a precious gift to the country

Speaking of the respect for human rights, religious freedom and freedom of expression that he said allow for creativity and the unleashing of the potential of the human potential and personality that further the common good, the Pope said the Albanian experience shows that a “peaceful and fruitful coexistence between persons and communities of believers of different religions is not only desirable, but possible and realistic.”

Pope Francis also referred to new challenges which must be faced “in a world that tends to economic and cultural globalisation”.

“Development”, the Pope warned, “will only be authentic if it is sustainable and just, that is, if it has the rights of the poor and respect for the environment close to heart.”

Separately, on Sunday, Pope Francis told Albania’s priests, religious and lay movements that despite their many difficulties, they must have the courage to go out and serve those most in need.

Speaking at Vespers in Tirana’s Catholic cathedral, the Pope recalled those pastors who paid a huge price under the atheist regime, experiencing prison and persecution in order to remain faithful to Christ.

When love for Christ is placed above all else, Pope Francis said, then we are able to move outside of ourselves, of our personal or communal pettiness, and move towards Jesus who, in our brothers and sisters, comes to us.

His wounds are still visible today, the Pope said, on the bodies of so many men and women who are hungry and thirsty; who are humiliated; who are in hospital or prison.

What people are looking for today, the Pope concluded, is not experts, but rather humble witnesses of the mercy and tenderness of God.

At the close of his Sunday visit, Pope Francis visited a residential centre for disabled and needy children run by an Italian charity in the Albanian capital, Tirana.

It was the final engagement of his one-day visit to Albania.

In his address at the Bethany Centre the Pope spoke of how faith, working through charity, can dislodge indifference, disbelief and apathy.

He also said goodness offers infinitely more than money which only disappoints and warned against measuring everything in terms of power and money.