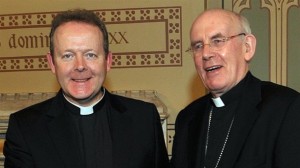 “It has been a great joy and privilege for me to serve” as Bishop and “to travel and meet people from all over Ireland in my role as Primate,” Cardinal Sean Brady said on Monday.

Following the announcement that Pope Francis had accepted the resignation the Cardinal tendered in August, the outgoing Primate of All Ireland gave an indication of his hopes for retirement.

“I hope to live near Armagh” he said at St Patrick’s Cathedral in the city on Monday morning. He added that he would continue pursuing his motto ‘To know Jesus Christ’ and that of the archdiocese’s, ‘To become the Body of Christ so as to bring the compassionate love of Christ to all’.

“I am looking forward to retirement and, no doubt, it will take me some time to get used to it, but it will be good to have more time for family, friends and to follow the football!” he said.

The Cardinal expressed his gratitude to the leaders and members of the other Churches in Armagh and throughout Ireland and to all who had assisted him to spread the Good News of Jesus Christ.

“The people of this Cathedral City of Armagh have been so good to me and will, of course, always remain close to my heart. I thank the City Council and send greetings today to all of you who live and work in this historic city.”

“Today I give thanks for many things. I thank God for all the graces and favours of so many happy years as a priest and as a Bishop. On this feast of her birthday, I give thanks to Our Lady for her loving protection down the years and the great happiness of going so often to her Shrines, especially Knock and Lourdes.”

He said the highlight of his life was to have taken part in the conclave which elected Pope Francis.

Referring to Pope Francis’ motto: ‘Miserando atque eligendo’, the 75-year-old said it challenged and inspired him with its message of God having mercy and at the same time choosing us, despite our sinfulness.

“It reminds me that I too need to say sorry and to ask forgiveness. And I do so again, now. At the same time, Pope Francis’ motto inspires me to trust in the mercy of God and to pray for the strength to do always as Jesus would have me do.”

He underlined that the people of the Archdiocese of Armagh and the people of Ireland would remain in his prayers “for the rest of my life.”

“I ask the favour of your prayers to help me continue to serve God as best I can all the days God gives me. God bless you always.” 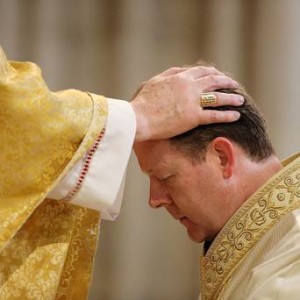 Cardinal Brady is succeeded by Archbishop Eamon Martin as Archbishop of Ireland and Primate of All Ireland.

The 52-year-old Derry native said he felt humbled to be following in the footsteps of St Patrick.

“Like him, I pray for ‘God’s strength to pilot me, God’s wisdom to guide me, God’s shield to protect me’.”

He said that over the past sixteen months he had been encouraged and inspired by the enthusiasm of young people and the dedication of teachers, the commitment and pastoral care given by priests and religious, and the willingness of so many people to become actively involved in the life of their parishes and diocese.

“I was ordained a bishop just a month after the election of Pope Francis. I chose my episcopal motto to be: ‘Sing a New Song to the Lord’, because I think we are all being challenged nowadays to find fresh ways of bringing the Gospel into the world.”

He continued, “Pope Francis inspires us to write that new song in a ‘missionary key’, and reach out to everyone in society with the love and friendship of Jesus.”

He said people have been asking him “to put ‘fresh heart’ into the renewal of the Church in this country. But I am only one person with all my inadequacies and sinfulness. The task of bringing the encouragement of faith to the world belongs to all of us – people, priests, religious sisters and brothers, bishops – working together in communion with Christ and with one another.”

He added that he was certain that a humble renewal in the Church in Ireland would only come about as our lay people exercise their specific vocation and mission to hand on the faith and to insert the Gospel into the reality of their daily lives and work.

“On this, my first morning as Archbishop of Armagh, I greet the leaders and members of the other Christian Churches and traditions; I hope that, as Cardinal Sean did before me, I can share their friendship and their passion for the Gospel of Christ.”

He also sent good wishes to people of other faiths and traditions, and to civic and political leaders throughout the diocese, assuring them of his respect and cooperation with them in serving the common good.

Archbishop Martin thanked his family and friends for their support as well as Cardinal Brady for his “encouraging words, your good wishes and the assurance of your prayers.” 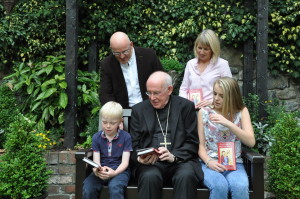 “This is not just my day. It is a day for us to recognise the years of service which you have given to the Church in Armagh and beyond. On behalf of the people, priests and religious of the Archdiocese of Armagh, I want to thank you sincerely for serving us with love and dedication. We appreciate all that you have done for us and we assure you of our continued affection and prayers. We wish you every blessing for a healthy and peaceful retirement,” Archbishop Martin told the Cardinal.

He added that during his years as Executive Secretary to the Irish Bishops’ Conference he saw at first hand the mammoth amount of work undertaken by Cardinal Brady as President of the Episcopal Conference and his tireless commitment to representing the Catholic Church in Ireland at countless national and international engagements.

“At the same time he always presents as a gentle and humble man who is never fully comfortable in the limelight,” he observed.

For the last 16 months, Archbishop Martin has been the Coadjutor archbishop of Armagh, with the right of succession.

On 1 October 1996, the then Coadjutor Archbishop Seán Brady succeeded Cardinal Cahal Daly in the See of St Patrick.

In March 2010, Cardinal Brady asked Pope Benedict XVI to appoint a Coadjutor to assist him and, on 18 January 2013, Mgr Eamon Martin from Derry was nominated to this role.

His ordination as Coadjutor Archbishop of Armagh took place on 21 April 2013, in the presence of people, religious, priests, bishops and civic representatives from all over Ireland.

Last month, on the occasion of his 75th birthday, Cardinal Brady submitted his resignation letter to Pope Francis.

Responding to the news of the Vatican’s acceptance of Cardinal Brady’s resignation, Bishop Leo O’Reilly of Kilmore, Dr Brady’s home diocese said, “On this day of mixed emotion I wish to acknowledge Cardinal Seán’s innate decency and personal kindness, and I will miss his support, wisdom and outstanding leadership of the Bishops’ Conference.”

Cardinal Seán is much loved here in the Diocese of Kilmore.

Bishop O’Reilly described the Cardinal as “a humble pastor of deep faith” who is “gifted with a strong pastoral instinct.”

“These defining qualities have equipped him well over the last twenty years as he led the Catholic Church through our most turbulent period since the Penal Laws,” the Bishop of Kilmore said.

He continued, “Cardinal Seán has worked tirelessly to achieve peace in Ireland; he prioritised and oversaw the development of robust child safeguarding guidelines for the Church; in the area of pastoral ministry he led the introduction of the permanent diaconate to Ireland; and at all times he promoted Gospel values and the faith in our contemporary society which is much less receptive to hearing the message of the Good News than in previous times.”