Pope ranked 4th most powerful person in world by Forbes 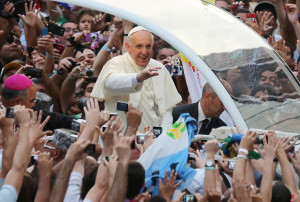 Pope Francis has been ranked as the fourth ‘most powerful person in the world’ in this year’s Forbes list.

His listing is up one place on last year’s when Benedict XVI was ranked fifth.

Top of the list is Russia’s President, Vladimir Putin, who was third last year.

President Barack Obama fell from the top place to number two, while the General Secretary of the Chinese Communist Party, Xi Jinping, jumped up six places to the number three spot.

The Forbes list consists of 72 people, one for every 100 million on earth, and is considered to be an annual snapshot of the heads of state, financiers, philanthropists and entrepreneurs who truly run the world.

First, they evaluate “whether the candidate has power over lots of people”. Next they assess “the financial resources controlled by each person, and see if they are relatively large compared to their peers”.

Then they determine “if the candidate is powerful in multiple spheres”, being powerful in just one area is often not enough. Lastly, “they make sure that the candidates actively uses their power.”

Meanwhile, oblivious to his alleged power, at his general audience on Wednesday, Pope Francis spoke of the communion of saints.

Continuing a catechesis on the Creed before 80,000 pilgrims, the Pope said that the communion of saints was the “the deepest reality of the Church, because in Christ, through Baptism, we are made sharers in the communion of life and love which is the Blessed Trinity.”

Faith needs the support of others, especially in difficult times, Pope Francis said. “Who among us has not experienced insecurity, disorientation, and even doubt along the path of faith?” he asked.

“We all have experienced this; I have too, it forms part of the path of faith, the path of our lives.”

This should not surprise us, he said. However, in difficult moments it was necessary to trust in the help of God, through prayer and “at the same time it is important to find the courage and the humility to open ourselves to others”.

“In this communion – because communion means common union – we are a great family, whose members all help and support one another,” he said.

The third aspect of the communion of saints was a spiritual communion which went beyond death and lasted forever.

“The communion of saints does not only embrace the Church on earth; it also embraces all who have died in Christ, the souls in purgatory and the saints in heaven.”

“We experience this solidarity between heaven and earth in our intercessory prayer and in the feasts of All Saints and All Souls which we shall soon celebrate,” he concluded.