Poor Clares offer healing for the soul through new song 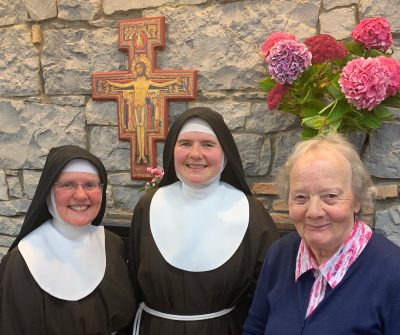 A community of contemplative nuns in Galway have launched a new single in response to the mental health challenges which so many people in Irish society today are facing, especially in families.

‘Calm the Soul’ is sung by the Poor Clare community in Galway City who launched it ahead of World Mental Health Day which takes place on Thursday 10 October.

The song is inspired by a poem from their best-selling book of the same name – ‘Calm the Soul’ – which the nuns brought out in 2012.

Abbess of the monastery on Nun’s Island in Galway City, Sr Colette explained, “This simple poem touched people who read it so deeply that we thought that a musical setting to the words could make it more widely accessible.”

“We began to experiment with various tunes and came up with a melody that draws on the musical motifs of a traditional Irish love song, and it seems to really capture the mood of the poem.”

“We decided to launch the song ahead of World Mental Health Day, because we know from our experience of people requesting prayers, that mental health challenges are a huge concern, especially in families. The pace of life today has caused a huge increase in the stress levels that people are dealing with. We feel the message of this prayer-song helps to put things in perspective,” Sr Colette said.

The Sisters also hope to raise awareness, through the release of the song, of the plight of persecuted Christians and they have included a section on their website highlighting this: www.poorclares.ie/persecuted-christians

The song, which was produced in collaboration with professional vocalists and musicians, was launched online at 9pm on Thursday night while an offline launch took place at the monastery in Galway earlier in the day.

Speaking afterwards, Sr Consilio said, “The Sisters sent me the song some time ago. There is a beautiful healing message there. Some of the people we work with have found it to be deeply moving and comforting. I think that this song will become part of our program for many years to come.”

After its YouTube premiere on Thursday night, the newly released single has since continued to gain in popularity, clocking up thousands of views even within the first few hours. 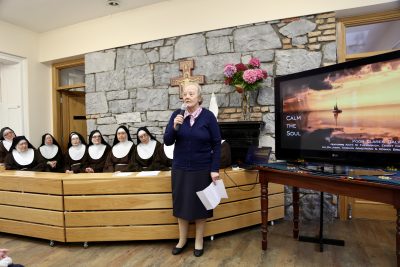 Sr Consilio addressing the launch of ‘Calm the Soul’

Responding to the news, Abbess Sr Colette said, “It’s God’s business what happens with the song and if it makes the charts that would be great. If it goes viral that would be great too. Our hope is that the message of the song will reach those who need a soul-lift or maybe who are just struggling to keep afloat in the ordinary everyday grind.”

The nuns received important help from professional artists as well as friends in the production of the song including from piper and flautist, Ronan Browne, and Ian Callanan, who acted as arranger and producer of ‘Calm the Soul’.

Speaking about the venture, Ronan Browne said, “Not only has it been a privilege to work on ‘Calm the Soul’, but it is also a wonderful adventure. I was honoured that the Sisters thought to invite me to contribute to sharing this essential prayer-poem with the many who need it in our manic and often-uncaring modern times.” 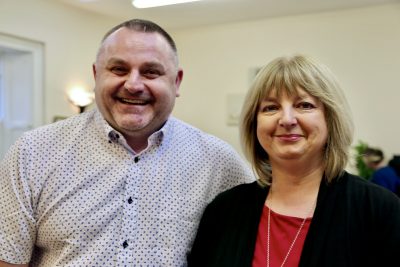 “From the moment the Sisters asked me to typeset a song they had written, to what has become one of the most exciting projects I have been involved in, ‘Calm the Soul’ has been a journey, spiritually, mentally and musically,” Ian Callanan explained.

He added, “The music and text are infectious. It is an honour to be part of this project in a time when so many need to hear these words of calm in their lives.”

The song can be downloaded here.