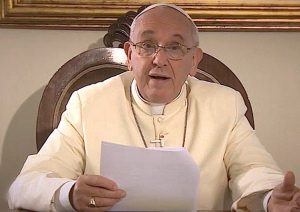 Pope Francis on Tuesday announced that the Church has abolished the ‘pontifical secret’ in clerical sexual abuse cases, making it possible for Church officials to share information with civil authorities and the police.

Responding to the news, Archbishop Charles Scicluna, assistant secretary of the Congregation for the Doctrine of the Faith and the Vatican’s top expert on investigating clerical abuse, said that the move would mean that dioceses can no longer “quote the pontifical secret to avoid either cooperating or sharing with the authorities.”

She highlighted that the scrapping of the pontifical secret was something that had been recommended by Pontifical Commission for the Protection of Minors during it first term, when she was a member of the PCPM.

“So good to see it being implemented. At last a real and positive change,” Ms Collins, who resigned from the PCPM in 2017 over curial resistance to the Commission’s recommendations tweeted on Tuesday.

Speaking to RTE Radio’s ‘Drivetime’, the Dublin campaigner for survivors of abuse paid tribute to Maltese prelate, Archbishop Scicluna, describing him as having “always been trusted by survivors”. She added that she believed he had a hand in seeing this through the implementation of this major reform.

“But it wouldn’t have been easy. It has taken two years from the time that the commission recommended it. I would say there was quite a lot of resistance to it,” she said.

Dublin priest, Fr Joe McDonald, who is a survivor of clerical abuse, told CatholicIreland.net, “I am not surprised at this news.”

He suggested that the steps taken by the Pope on the Pontifical Secret and the Vatican’s raising of the definition of a minor from 14 years to 18 years for offences concerning the child abuse images proved that the Pontiff “takes this malaise in the Church very seriously”.

“This is a reformer, up there with the best of them. He is a Jesuit. He is increasingly time-conscious, he turned 83 today. He has a lot of work to do! He is in a hurry,” Fr McDonald said.

The parish priest of St Patrick’s in Celbridge added, “Whilst I continue to admire him and marvel at his courage, it does in fact make me edgy.”

He explained that his edginess was “rooted in my fear that prophetic actions, steeped in the gospel, such as today’s news, puts Francis more directly in the line of fire.”

“I mean specifically that as he digs deeper into implementing his reform agenda he may fall foul of the Prince of Darkness himself or at least his agents, most particularly those agents of darkness who lurk within the Vatican.”

According to Anne Barrett Doyle, co-director of BishopAccountability, “pontifical secrecy has been an obstruction to civil justice, spurring bishops worldwide to thwart prosecutions of abusive priests” for decades.

In a statement, she stated, “Let’s hope this reform is a first step toward correcting the deep anti-victim bias of canon law – a system skewed towards protecting the abuser and saving his priesthood.”

She said the Pope was making his announcement at a time when the Church’s secrecy around abuse has “become a legal liability, putting it on a collision course with civil society”.

“Prosecutors are nabbing not only abusive priests but the bishops who fail to report them. In France, two bishops, including a powerful cardinal, recently have been convicted for failing to report. In Chile and the United States, law enforcement has raided multiple church offices and confiscated secret abuse files. In Argentina, a provincial court last year found that the church’s secrecy laws violated the Argentine constitution. In Australia, state legislatures have passed laws requiring the reporting of abuse revealed in confession. Pope Francis is removing the pontifical secret at a time when it’s no longer tolerated.”

“Will the secret be lifted retroactively to cases still hidden? Does this mean the Vatican will make public the names of the thousands of priests it has found guilty? The practical impact of this change will be determined by how broadly it is applied.”

Welcoming the Pope’s re-definition of the age of minor in relation child abuse images, Anne Barrett Doyle said that to date the Church has been especially lenient towards priests who offend against older children. “Extending the pornography ban sends a message that this vulnerable group of minors must be protected.”

However, she also warned that the measures announced on Tuesday “fall short of what’s urgently needed”.

“Even with these changes, canon law will continue to undermine secular legal systems. To begin with, and most urgently, Pope Francis must enact true ‘zero tolerance’ for child abusers. This means requiring the permanent removal of every priest found guilty of child molestation. It’s a little-known, appalling fact that under universal church law, guilty priests still are allowed to remain in ministry.”